It’s hummingbird season around here – they’re spending a lot of time filling their tanks. The other day, Dr. M & I were sitting outside & there was a hummingbird dogfight – we actually got strafed! I wish we’d been videotaping – although they’re so quick I can’t imagine being able to keep up.
Sunday, August 2nd
I wanted something green on my turkey & homegrown tomato sandwich & I found just the thing – shelled edamame. It was pretty tasty!

My daily walk. I have a Facebook friend who helped me decipher the message on the fire hydrant: Die Out F’n Cancer. I think that’s a sentiment we can all agree with (even if we wouldn’t use exactly that language).

Tuesday, August 4th
The temperature in my office when I arrived this morning. Brr!

A non-square project I’m going to work on between patterns.

Wednesday, August 5th
New glasses! These are progressives that I should be able to wear all the time, once I get used to them. I was so tired of putting my reading glasses on & taking them off many times a day. We’ll see how I like wearing glasses even more often.

Dr. M has been enjoying our tomatoes. Keeping ahead of the squirrels & birds is quite a trick…

Friday, August 7th
Around the yard. That flower that appears white is actually a pale purple & has been growing in Pinkie’s pot. Yes, not content to be the mother of petunias, she has now grown verbena. Hilarious!

My daily walk. Our neighbor gave us some hibiscus cuttings from his gorgeous plant – hope ours are as pretty next year. The naked ladies are out everywhere these days – so pretty!

Saturday, August 8th
My daily walk – a little earlier in the day because we were going out to dinner with one of Dr. M’s colleagues that evening. (Note: this is hilarious because when we got to their house we walked around their property, and then later we walked around downtown for a while, so my fitbit was VERY happy with me by the end of the day.)

When we got to town (Bellefontaine), there was a classic car show going on! So we checked out the cars while we waited for our table.

I had the Clint Eastwood pizza. I don’t know why it has that name, but I do know it was the first time I’d ever had potato chips on a pizza! It was pretty darned tasty. 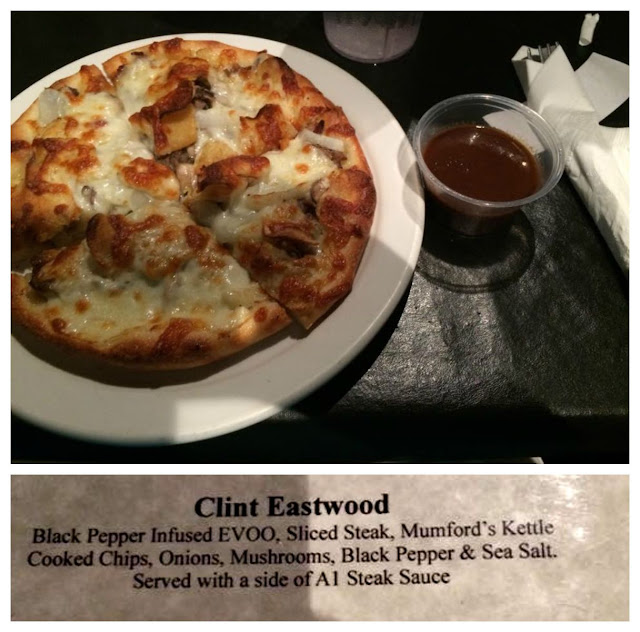 After dinner, we took a tour of their historic theater – the car show was to benefit renovations. The inside was so fascinating! You can’t tell from the photo, but the clouds moved & there were stars winking in the sky. So cool!