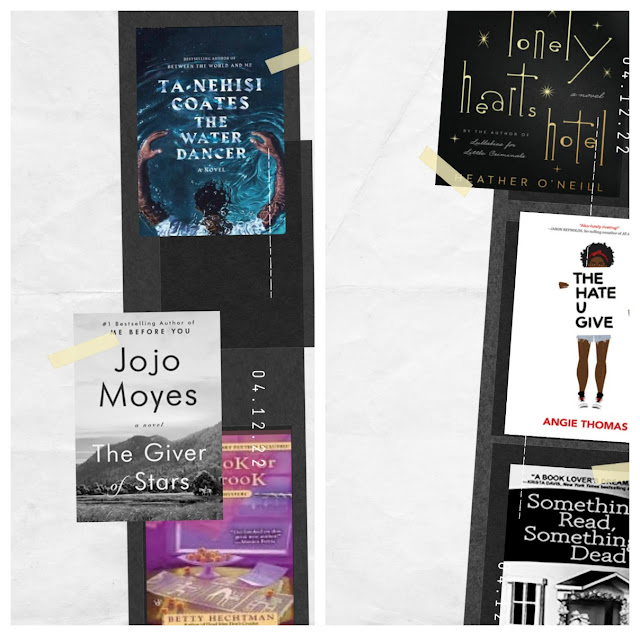 It seems crazy that another month has ended & it’s time for my book reviews. It feels like I should be getting even more reading done these days, but as I think I mentioned in another post I’m having trouble concentrating. Nevertheless, I have six books to review.

The Bug Says: Somehow I accidentally ended up reading the 5th book in this series without having read any of others. It was pretty cute – a cozy mystery set in a library in a lighthouse on the NC coast? Sign me up!

2. The Lonely Hearts Hotel, by Heather O’Neill. Did Not Finish A spellbinding story about two gifted orphans in love with each other since they can remember whose childhood talents allow them to rewrite their future.

The Lonely Hearts Hotel is a love story with the power of legend. An unparalleled tale of charismatic pianos, invisible dance partners, radicalized chorus girls, drug-addicted musicians, brooding clowns, and an underworld whose economy hinges on the price of a kiss. In a landscape like this, it takes great creative gifts to thwart one's origins. It might also take true love.

The Bug Says: I never don’t finish a book. Well, let’s say I finish about 99.9% of the books I start. But this one was just too…. I can’t even describe it. I might have been ok with the very dark and slightly pornographic story line, but the style of the writing was just too weird for me. It got so annoying that I did something else I never do – found a review that told how the story ended. Once I saw where this was headed I decided to not waste any more time on it. Lots of other people like it though, so have at it if it sounds interesting to you.

3. The Hate U Give, by Angie Thomas. ★★★★★ Sixteen-year-old Starr Carter moves between two worlds: the poor neighborhood where she lives and the fancy suburban prep school she attends. The uneasy balance between these worlds is shattered when Starr witnesses the fatal shooting of her childhood best friend Khalil at the hands of a police officer. Khalil was unarmed. Soon afterward, his death is a national headline. Some are calling him a thug, maybe even a drug dealer and a gangbanger. Protesters are taking to the streets in Khalil’s name. Some cops and the local drug lord try to intimidate Starr and her family. What everyone wants to know is: what really went down that night? And the only person alive who can answer that is Starr. But what Starr does—or does not—say could upend her community. It could also endanger her life.

The Bug Says: I didn’t think I would like this book. The subject matter is difficult. The main character is a teenage girl (and I am so tired of books about teenage girls). But it was so good. I’ve been sitting here for a few minutes trying to explain what was so good (the relationships between the characters, the humor, the descriptions of the balancing act that Starr engages in every day…). I don’t know why – it just clicked. Also, the narrator did a great job, which always helps.

4. The Water Dancer , by Ta-Nehisi Coates. ★★★★★ Young Hiram Walker was born into bondage—and lost his mother and all memory of her when he was a child—but he is also gifted with a mysterious power. Hiram almost drowns when he crashes a carriage into a river, but is saved from the depths by a force he doesn't understand, a blue light that lifts him up and lands him a mile away. This strange brush with death forces a new urgency on Hiram's private rebellion. Spurred on by his improvised plantation family, Thena, his chosen mother, a woman of few words and many secrets, and Sophia, a young woman fighting her own war even as she and Hiram fall in love, he becomes determined to escape the only home he's ever known.

So begins an unexpected journey into the covert war on slavery that takes Hiram from the corrupt grandeur of Virginia's proud plantations to desperate guerrilla cells in the wilderness, from the coffin of the deep South to dangerously utopic movements in the North.

The Bug Says: At the other end of the spectrum (or maybe at the beginning of the spectrum) from The Hate U Give is this excellent book that gives a whole new twist to the Underground Railroad. It is beautifully written, and the story is so fascinating. Again, not my usual fare, but I highly recommend it!

5. The Giver of Stars, by Jojo Moyes. ★★★★ Alice Wright marries handsome American Bennett Van Cleve hoping to escape her stifling life in England. But small-town Kentucky quickly proves equally claustrophobic, especially living alongside her overbearing father-in-law. So when a call goes out for a team of women to deliver books as part of Eleanor Roosevelt’s new traveling library, Alice signs on enthusiastically.

The leader, and soon Alice’s greatest ally, is Margery, a smart-talking, self-sufficient woman who’s never asked a man’s permission for anything. They will be joined by three other singular women who become known as the WPA Packhorse Librarians of Kentucky.

The Bug Says: Set in a pre-WWII Kentucky mining town, this book has all the themes that you might expect: misogyny, union busting, racism, anti-intellectualism… But it was a really good read – not as depressing as it sounds like it might be.

6. By Hook or By Crook (Crochet Mystery #3), by Betty Hechtman. ★★★ Molly Pink's crochet group has a new mystery on their hands when they find a paper bag that contains a note that speaks of remorse, a diary entry of the sorrow of parting, and a complicated piece of filet crochet that offers an obscure clue in pictures. Things get even more complicated when they find the talented crocheter-murdered by a box of poisoned marzipan apples.

The Bug Says: Here is another series book that I started in the middle. I was attracted to it for obvious reasons (a crochet mystery? I’m in!), but it was just ok. The characters were a little bit annoying – but I think that if I’d “met” them from the beginning I might have liked them better. But what really didn’t click for me was the “complicated piece of filet crochet” that they were using to solve the mystery. Some of the panels were just dumb. Yes, dumb. But it was a cute & fast read – I might read the next one if I come across it.

I’m writing this out on the deck on a lovely spring Saturday afternoon. It would be the perfect time to finish my current book (The Starless Sea – a very bizarre book that I’m strangely fascinated by). So I think I’ll just stop writing now & start reading. What is holding your interest these days?