They Just Want to Live

I was going to write a post about the George Floyd, but this video and these words from the interim pastor of my church say everything that I'm feeling. Dr. M has also been very eloquent - maybe I'll do another post later with some of his thoughts.


Howard Thurman asks us a damning question in his book “Jesus and the Disinherited: “Why is it that Christianity seems impotent to deal radically, and therefore effectively, with the issues of discrimination and injustice on the basis of race, religion and national origin?”

We have personalized racism saying “I don’t have a racist bone in my body” when it is a systemic problem far more than a personal attitude.  When Social Security was called for by President Franklin D. Roosevelt, he bent to the will of the South who wanted their farm laborers and domestic help to remain exempt from the program so those in power (uniformly white people) could save money at the expense of their black servants and laborers. Blacks returning from WW2 could not always get the same GI bill housing benefits and colleges were still allowed to refuse admittance to African Americans so an advanced education was again often denied. We see the ongoing segregation in our all too unequal schools.

White people have systemically had their foot on the necks of African Americans.  When a police officer in Minneapolis kept his knee on George Floyd’s neck for nine long minutes as he choked to death, it is no surprise that anger and violence has erupted. From afar, both physically and experientially, we white folk are put off by the vandalism and destruction that has followed and wonder why the anger is so intense.

Frederick Douglass offered this explanation in 1886:
“Where justice is denied, where poverty is enforced, where ignorance prevails and where any one class is made to feel that society is an organized conspiracy to oppress, rob and degrade them, neither persons nor property will be safe.”

The black citizens of Minneapolis (and Charlotte and Hickory and Los Angeles) have seen the failure of our policing system one more time when all four officers ignore the pleading of a dying man and a crowd of witnesses.  They doubt the justice system will serve them any better.

This week we celebrate Pentecost Sunday and read from Acts 2 which celebrates a diverse gathering of people from around the world. The Spirit offers us a greater challenge than we have typically embraced. Our personal behavior always matters.  But what matters even more in the search for justice is that we overturn the temple tables and begin to rebuild our societal and political structures so that “the least of these” are no longer trampled underfoot. 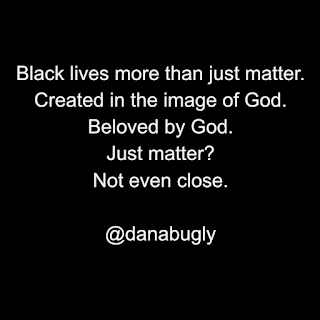