My personal life has been fine. I had a good week at work. Sue had surgery that went well. Dr. M has done a great job of feeding me. I’ve enjoyed the books I’ve been reading. But nationally it has been a train wreck! The RNC, hurricane, wildfires, and The Black Panther died. Such a hard week! And I didn’t even mention that we’re still in a pandemic. Oof.
Sunday, August 23rd
I was in bed playing a game on my phone when I thought to myself, “Self – you haven’t taken a picture today, have you?” The answer was no, so I took this picture of all the stuff on the trunk across from the bed. I think I might have enough accent pillows. Those two white ones are pillow inserts for some crochet project that hasn’t happened yet. 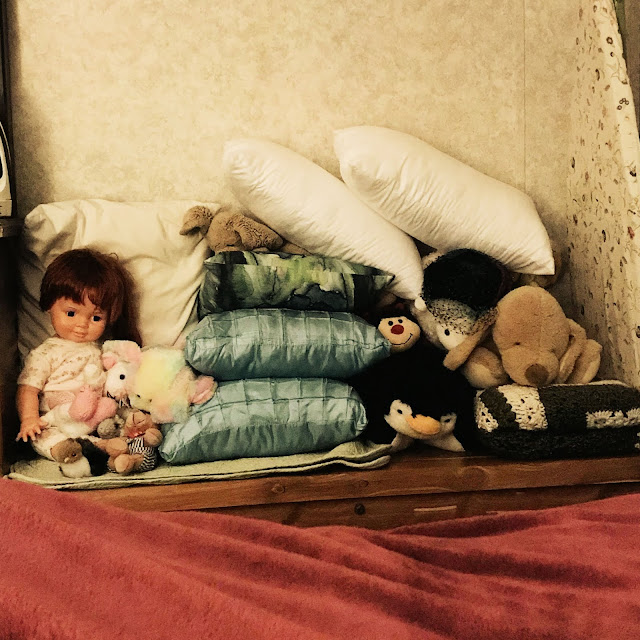 Monday, August 24th
I had this grand idea of taking pictures of my outfits this week so I could remember how I put them together the next time I want to wear them (I figure I’ve already gone through the pain of figuring it all out – why have to do it again?). However, this is the only day I remembered. And it’s the only picture I took that day. 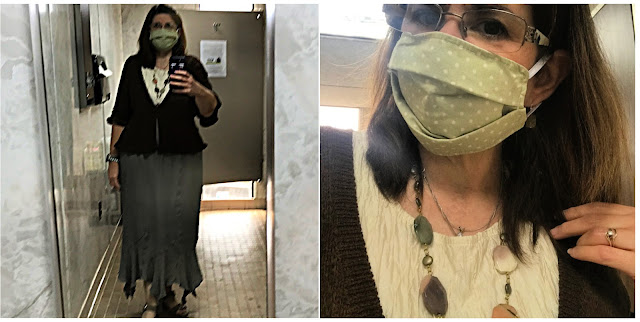 Tuesday, August 25th
Just another entry in the Bang Chronicles. They are this || close to staying tucked behind my ears. I got them cut a year ago this week according to my Facebook memories (they did get trimmed again a few times – I’ve just been growing them out since March). 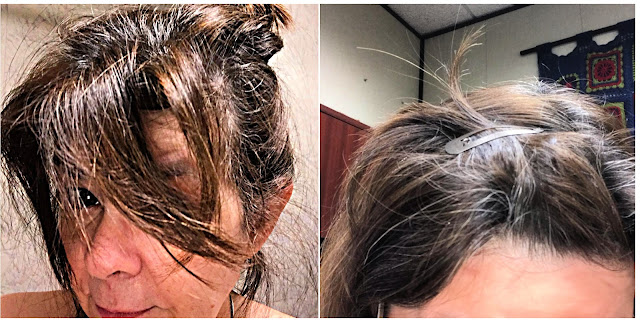 Wednesday, August 26th
I’m glad I’m the kind of person who doesn’t let herself run out of dental floss. Otherwise this picture would make me very sad. 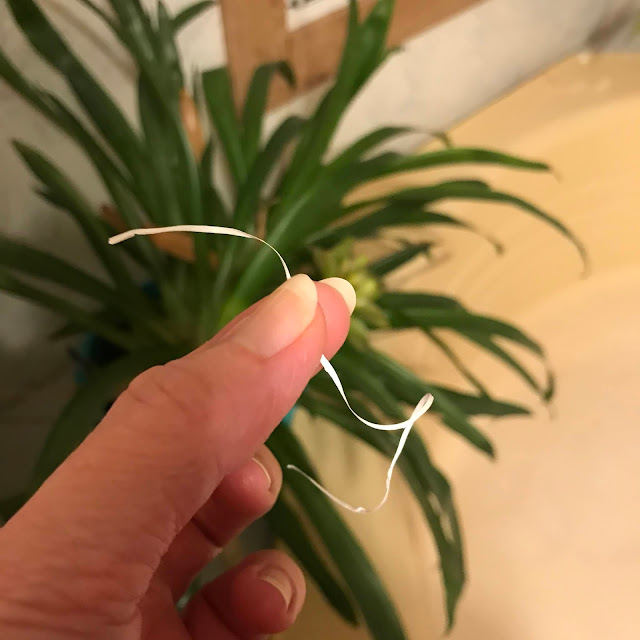 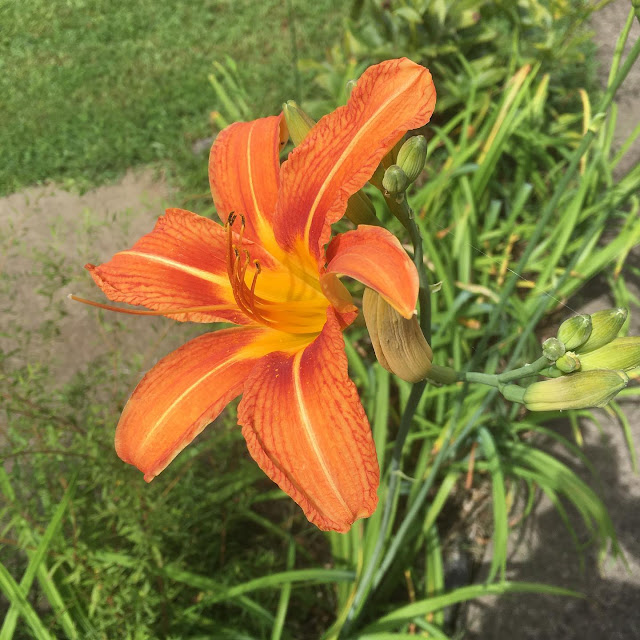 Friday, August 28th
Broke my $10 kiddie sunglasses. Very sad. Also, as I said on the socials, 50 something year old women shouldn’t try to do the pouty look. 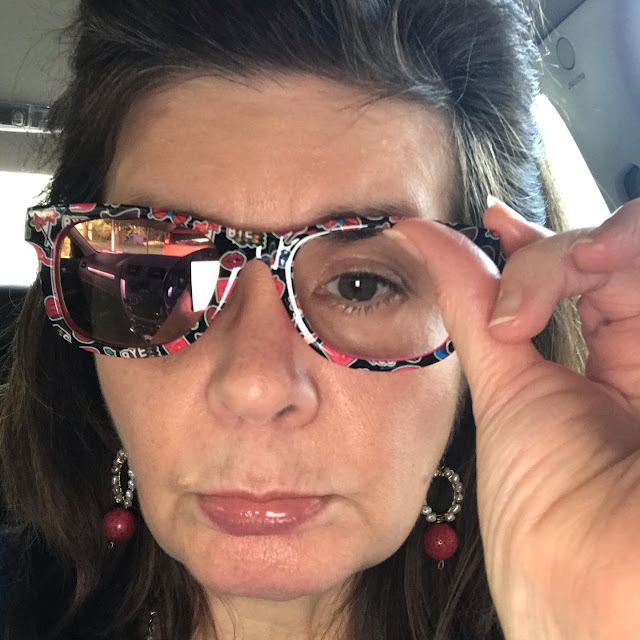 Saturday, August 29th
Your weekly progress photo. I only got two sides done. I’m including a photo showing how I’m joining the squares as I go. The squares are just joined on the corners. It sort of makes me think of (very colorful) chain mail - ha! 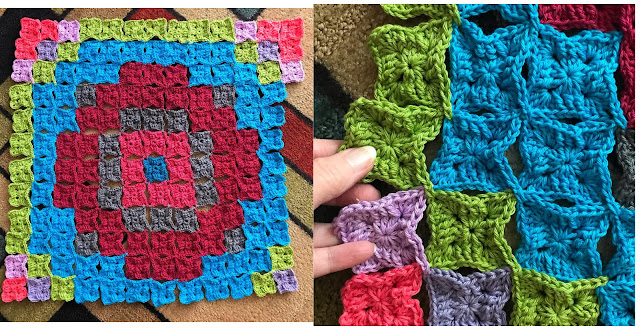 Tomorrow we’re having church in the sanctuary for the first time since March. We’re blocking off pews, wearing masks, not singing, not hugging… I feel conflicted – a little worried that we’ll slip up & not be safe, but also salty that I have to leave my house. I’ve gotten used to staying home on Sundays! I’ll let you know how it went.

I’m going to close with some ranting that I did on FB. I posted an essay from someone about systemic racism. An acquaintance started posting stories in the comments about how bad Black Lives Matter (the organization) is, and how good the police are, and how a liberal congresswoman called for unrest in the streets (like that’s a bad thing). Here was my reply to her: “I'm increasingly frustrated with the response of 'but they did this' & 'they did that' to any discussion of systemic racism. I understand that it can be hard to grasp because we've breathed it like air & bathed in it like water for CENTURIES. But we have to try. Because the REASON that people behave like they do is embedded in the structures that have privileged white people. Stop looking at what they're doing & try to figure out why. And then work to make changes. Because unrest is going to be there until we fix it.” Then she posted ANOTHER story saying that all lives matter. So I said this, “…you continue to miss the point. I DON'T CARE what people are doing in this particular instance. WHAT ARE WE DOING to fix the system that is causing the unrest? It's like telling your child to keep quiet when they try to explain what hurts, as if it will just go away if they shut up.”

That was WAY out of my comfort zone. So basically I need to hide under a rock for a few days. I’ll see you guys next week!
at August 29, 2020

Email ThisBlogThis!Share to TwitterShare to FacebookShare to Pinterest
Labels: crochet, Drama Queen, flowers, Hair, I Have No Shame, Project 365