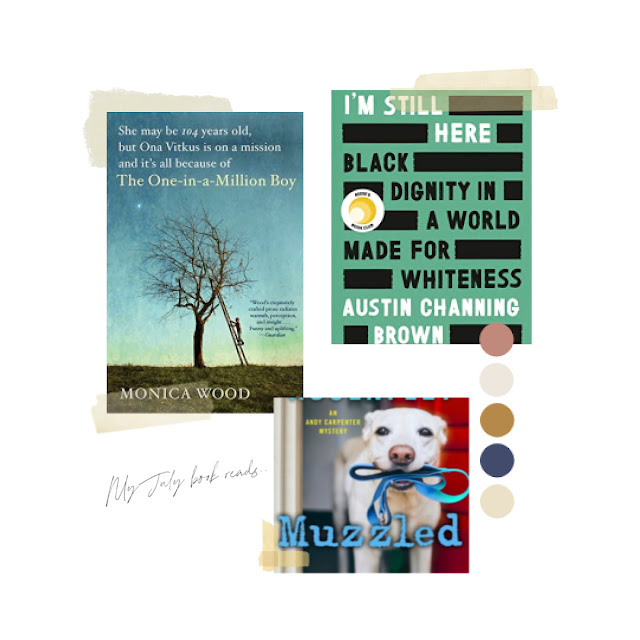 I only have three books to review this month. One reason is that one of the books from my June post was actually finished in July. Oops. The other reason is that I listened to a LOT of podcasts in July! Maybe I’ll do a post about those sometime (hint – Brene’ Brown, Jen Hatmaker, and The Evolving Faith podcast feature).

1. I'm Still Here: Black Dignity in a World Made for Whiteness, by Austin Channing Brown. ★★★★★ Austin Channing Brown's first encounter with a racialized America came at age 7, when she discovered her parents named her Austin to deceive future employers into thinking she was a white man. Growing up in majority-white schools, organizations, and churches, Austin writes, "I had to learn what it means to love blackness," a journey that led to a lifetime spent navigating America's racial divide as a writer, speaker and expert who helps organizations practice genuine inclusion.

In a time when nearly all institutions (schools, churches, universities, businesses) claim to value "diversity" in their mission statements, I'm Still Here is a powerful account of how and why our actions so often fall short of our words. Austin writes in breathtaking detail about her journey to self-worth and the pitfalls that kill our attempts at racial justice, in stories that bear witness to the complexity of America's social fabric--from Black Cleveland neighborhoods to private schools in the middle-class suburbs, from prison walls to the boardrooms at majority-white organizations.

For readers who have engaged with America's legacy on race through the writing of Ta-Nehisi Coates and Michael Eric Dyson, I'm Still Here is an illuminating look at how white, middle-class, Evangelicalism has participated in an era of rising racial hostility, inviting the reader to confront apathy, recognize God's ongoing work in the world, and discover how blackness--if we let it--can save us all.

The Bug Says: Oh man, what a powerful book. There are so many ways that Black women have to play a role just to exist in corporate America (and yes, I’m including Christian organizations in this). It must be exhausting. This book does a great job of showing just what that looks like and why our standard “solutions” are no solution at all.

2. The One-in-a-Million Boy, by Monica Wood. ★★★★★ “The story of your life never starts at the beginning. Don't they teach you anything at school?” So says 104-year-old Ona to the 11-year-old boy who's been sent to help her out every Saturday morning. As he refills the bird feeders and tidies the garden shed, Ona tells him about her long life, from first love to second chances. Soon she's confessing secrets she has kept hidden for decades.

One Saturday, the boy doesn't show up. Ona starts to think he's not so special after all, but then his father arrives on her doorstep, determined to finish his son's good deed. The boy's mother is not so far behind. Ona is set to discover that the world can surprise us at any age, and that sometimes sharing a loss is the only way to find ourselves again.

The Bug Says: I loved this book! It was another book club book (read during the actual month that I was supposed to read it). It engaged me from the very beginning. I was fascinated by Ona and the mystery of the boy. It’s a lovely story of grief and redemption. READ IT! (Or not, I’m not the boss of you.)

3. Muzzled, (Andy Carpenter #21) by David Rosenfelt. ★★★★ Andy Carpenter is a lawyer who would rather not practice law. He'd rather spend his time working with the Tara Foundation, his dog rescue organization, and being with his family and his two dogs, Tara and Sebastian. But when a friend asks him for a favor that involves both dogs and his lawyerly expertise, he can't say no. Andy's friend Beth has found a stray that seems to have belonged to a murder victim--in fact, the man and two of his colleagues died in an explosion a few weeks ago. But when the murdered man contacts Beth, asking for his dog back, Andy knows there must be more to the story. The man claims his life is in danger, and that's why he disappeared. As much as Andy doesn't want to get involved--anything to avoid a new case--he can't help but come to the rescue of a man who'd risk everything, even his life, to reunite with his dog.

The Bug Says: This is one of my favorite books series. The main character is hilarious and the mysteries are usually very engaging. I’ve only ever listened to the audiobooks for this series (the narrator is really good), but I actually won this one in a Goodreads giveaway so I read the paperback. The story was just as fun and interesting as always, but oh my goodness there were a lot of typos and things that an editor should catch. I had no idea that the books were so sloppy – the narrator does a great job of cleaning that stuff up. Or this was just unusual. I don’t know – but it certainly won’t stop me from reading book #22.

I finished my Harry Dresden book yesterday (no spoilers!), and I’m currently reading Ta-Nehisi Coates’ book Between the World and Me, and Ibram X. Kendi’s book How to be an Antiracist. I’ve been reading the Kendi book for a couple of months – I bought it, but kept having library books become available so I would put it aside to read them. Now there’s nothing else on my shelf so I should have it on my August list next month. What have you been reading lately?