I am sitting in my warm home watching it snow! I’m excited about it because I have nowhere to go until Tuesday, so it’s just pretty & not a nuisance.
Sunday, January 9th
From the socials: I’ve never been what you’d call high energy. I’ve always had to give myself little pep talks to get things done. And my favorite place to be is home, so I’ve always low key resented social engagements. But I think it’s finally time for me to admit that the last two years have taken their toll. I feel like I’m folding in on myself. Every task and every social interaction takes So Much Energy. Today I went to church & cleaned the floors. That will probably be all that gets done (except for laundry - weirdly I like doing laundry). And that tree will probably stay up until the time changes.
Despite what I wrote there, I did go through the two HUGE bins of Irish wool yarn that some fellow church members in Ohio gave me years ago (I have a project in mind). This is just a sampling of what’s in there – and I found some mohair! I am a little intimidated by mohair – we’ll see if I ever do anything with it.
Monday, January 10th
There’s another 10 year challenge going around on the socials (post a pic of yourself from 10 years ago & today). I decided to post this poem instead, which I taped to a dressing room mirror in a Kohl’s in Ohio 10 years ago.
Tuesday, January 11th
I wore an interesting cape situation to work & was trying (and failing) to take a photo of it.
Wednesday, January 12th
Sunset on my way home from work. It was lovely!
Thursday, January 13th
Yes, we are back in this situation again. You would think after nearly 2 years of wearing a mask with my glasses I would have it sorted, but no.
Friday, January 14th
My dad went to the hospital on Thursday for a stress test which was apparently VERY stressful! They admitted him, and once a room was finally available (he was in the ER for almost 24 hours) they performed a cardioversion and sent him home. He felt a lot better right after the procedure, but is now adjusting to all his new meds. Anyway, I took the first photo in the hospital because it made me laugh, and then I took the second one once he got home as an apology to him for posting the first photo. 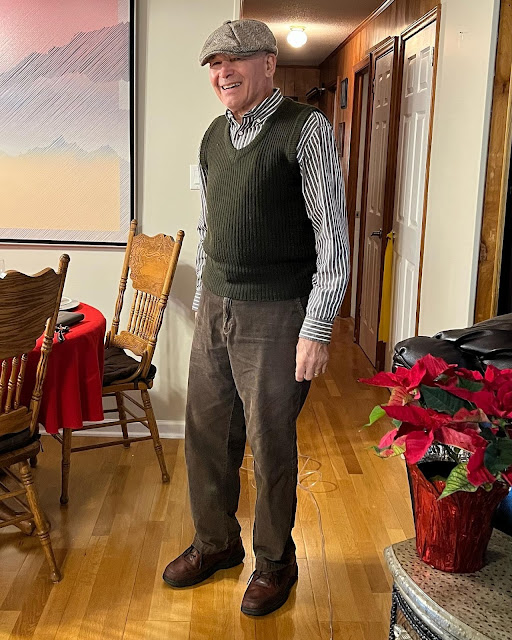 Saturday, January 8th
This is a tale of woe and incompetence. My brother’s family was out of town & asked me to stop by to get their mail and to also make sure that their smaller dog (Holly) could figure out how to get back in the basement (she is not all that sure about the doggy door). I successfully lured the larger dog (Chloe) back into the house, but Holly was having NONE OF IT. So I had the bright idea to go through the house & unlock & open the basement door. Which worked GREAT. Except I forgot to close the door at the top of the stairs & so both dogs raced up there and there was nothing I could do to convince them to go back into the basement. The CAT went into the basement (she came back up later). Then I tried to lure them back outside. Nope. The CAT went outside (I got her back in). So the end result was the two dogs sitting at the very top of the stairs staring down at me very smugly. Sorry Joe and Bren. (P.S. there was some hilarity when I almost lured Holly out the door, but the cat came instead & I said “not you!” & then Holly went running away. This happened about four times. Lort.)
Meanwhile, Dr. M was getting ready for snowpocolypse!
We have around 3 – 4 inches of snow. I’m getting ready to eat some lunch and then I shall spend the rest of the day crocheting. I’ve started working on the border for my temperature blanket. I hope to have the final result to share next week. How are you spending your Sunday?
at January 16, 2022