We made it to the new year! Amazingly, it feels pretty much the same as the old year…Sunday, December 27th
Before & After. I went to church (I was the liturgist) and then came home & got right back into my Christmas jammies.
Monday, December 28th
I spent a RIDICULOUS amount of time planning my new temperature blanket. I used last year’s temps to see what it would look like with 5 or 10 degree ranges for color changes (I'm going with 5 degree), and also tried to find a pattern that wouldn’t end up being a monster like the last blanket (pictured, in case you had forgotten).
Tuesday, December 29th
Hair mood.
The (almost) full moon!
Wednesday, December 30th
I told Dr. M that I was going to wear this to work. He said that the jacket did match the shoes, but he was laughing, so…
Thursday, December 31st
Chickpea bok choy soup – it was GOOD!
Friday, January 1st
I stayed up WAY TOO LATE on New Year’s Eve waiting on this little gentleman’s arrival. Although he wasn’t due until January 17th, Little Grayson decided to come a bit early. His mom started having contractions on Thursday morning. I got to bed around 1:30 am, and it turns out that he was born at 1:20 am (our time – they’re in Oklahoma), but I didn’t find out until I woke up. Brandon is my nephew and had been stationed in South Korea. They made it back stateside just in time – their furniture is still on its way. It was all very exciting – theirs was the first 2021 baby at that hospital & city. 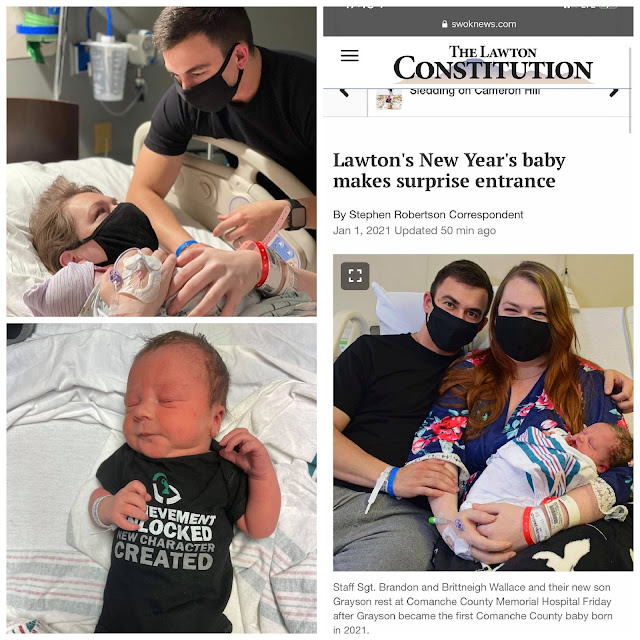 For January I’m participating in a Make Don’t Break challenge on Instagram. We're getting motivational emails each day, and the only rule is that we have to work on making something every day. My plan is to finish up some WIPs before I get started on my temp blanket. Here’s the first one – my dad basically wanted a skull cap to keep the top of his head warm. I hope this works for him. It ended up being Dallas Cowboys colors, which was NOT planned.
Saturday, January 2nd
My next finished WIP – the hat that I was making last week. It finally started actually looking like a hat. Whew!
Here is something wild. Yesterday I did a test run of the temperature blanket pattern that I’ve decided to use. I wanted to make sure it wasn’t too worky & that the yarn I plan to use will be ok. It was all fine. Today I went to record the temperature for yesterday (I’m using the average temp for the day), and it was in the range for the color that I used for the test! Cue Twilight Zone music…
Did you guys do anything fun for NYE? You know what I did – nervously crocheted & played games waiting on Mr. Grayson to be born. It was time well spent!
P.S. This coming week is a big deal for our democracy - I'll be praying for Georgia and that the shenanigans during the electoral vote roll call aren't too disruptive!
at January 02, 2021