I am kicked back in my recliner, typing this post with one eye open. This is when I REALLY wish I was the kind of person who took naps. Sure I could sleep now, but then I wouldn’t be able to sleep later and that just wouldn’t do. Anyway, we’ll see what kind of gibberish I type when I’m not quite awake.
Sunday, April 10th
Dr. M got a photo of our phoebe in her nest. I think this is the third or fourth year she has nested on the light in the carport. She seems to tolerate us a little more this year (although we think the babies have hatched, so she might be more protective now).
Monday, April 11th
We leave the hanging basket on the crook over winter to balance out the bird feeder, and give the birds somewhere to perch while they wait their turn. It’s blooming now, so Dr. M calls it Not Dead Fred. Ha!
Tuesday, April 12th
Went by Daddy & Sue’s place to finish this beast. It’s 1000 pieces, and seemed a lot harder than most of the ones we’ve worked lately. All that greenery, and the same flowers on either side of the puzzle… We are VERY HAPPY that it’s done now! (Sorry for the wonky photo. I am short.)
Wednesday, April 13th
Scenes from Dr. M’s father’s yard. Clockwise from top left: flowering dogwood, azalea, apple tree, and some little yellow invasive weed that we think is pretty.
Thursday, April 14th
Dr. M watched this fellow walking around in the rain.
Friday, April 15th
Azalea close-up with bumblebee.
The wildflowers I planted are starting to come up. And last year’s crop is looking very interesting! The front bed is bee balm central – we’ll have to get a photo of it. 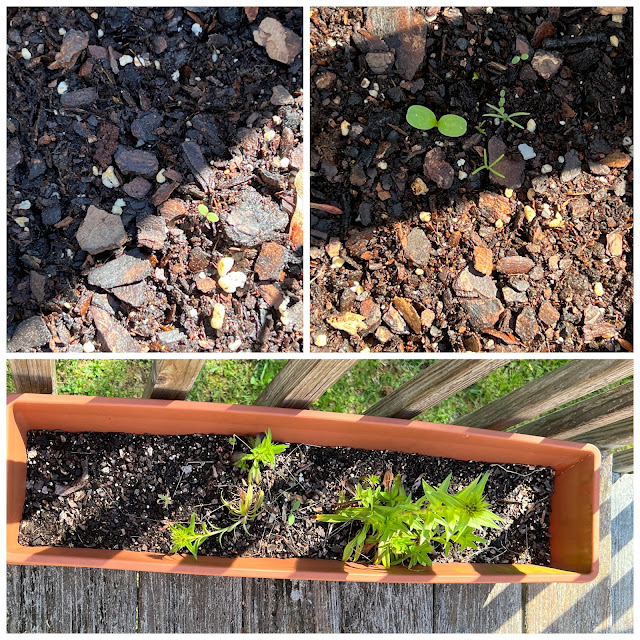 Sue had surgery on Thursday (she’s doing well) and they ended up keeping her Friday night too, so I made the trip to Charlotte to take her a few things that she needed. I parked in the Blueberry section – so much easier to remember than Section 5E or whatever.
Saturday, April 16th
Close-up of the volunteer flowering dogwood at Dr. M’s dad’s house – the blossoms are 2-3 inches across!
I had a wedding shower to attend and although I bought wrapping paper and bows, I didn’t see any ribbon I liked. Rather than go to another store I spent two hours making “ribbon.” I don’t know – my brain is kind of weird. (Kudos to Dr. M for wrapping the gifts for me!). 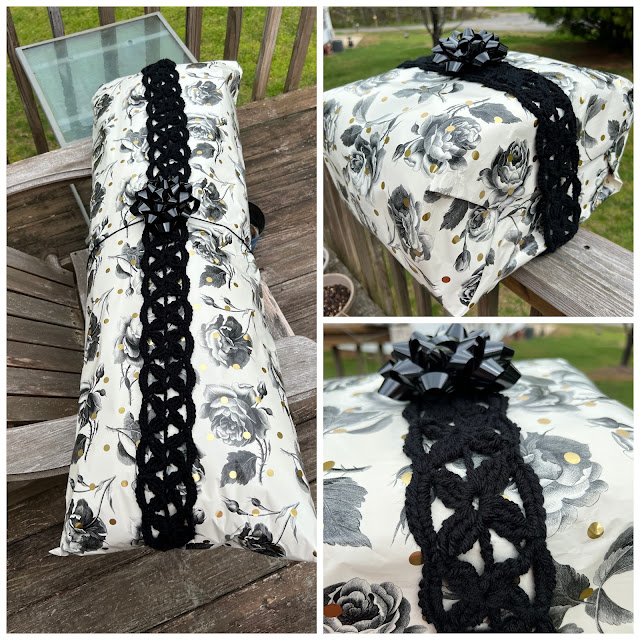 Here are ¾ of the four college musketeers! Kim (middle) is the mother of the bride and my best friend. Jenny (left) is our college friend and wedding planner (she helped plan my wedding way back in the day, although her sister was the one in charge). And this is a terrible photo of the very cute couple. They’d just opened a quilt panel made by a friend from a picture of their new dog – it was a very tender vittles moment. 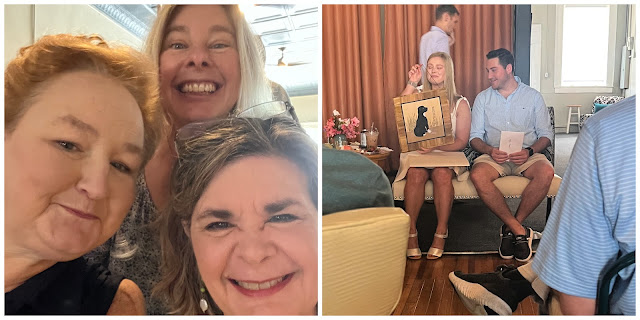 One of the people who was leaving our department has decided to stay (thankyoujesus), but now I’m in the middle of open enrollment. I spent this past week printing out packets for 600 employees & stuffing them into envelopes (the packets, not the employees). I had help, but on Wednesday I had hit my step goal by 3:00. I was SO EXHAUSTED. I don’t usually have that much manual labor all at one time. The next two weeks will be full of answering questions, sorting out returned paperwork, and getting ready for all the data entry. It will be crazypants. But we have a system so hopefully I won’t be crazypants. (Let’s face it – I will be crazypants.) So, what’s going on with you?
at April 17, 2022