Well good people of the internet, you’d better fasten your seatbelts because if you’re not attached to your chair you might fall out when you fall asleep after reading this. Frankly, it was just too damned hot for picture-taking. What it was good for though, was ranting.
Sunday, July 14th
Today was the third anniversary of when Dr. M found out that his position had been cut at Urbana University. This is what he had to say about it: Bastille Day, 2016. The faculty and staff reductions at UU were in full swing, and both formerly tenured faculty and longtime staff were being carted off to meet Madame le Guillotine in HR. I actually felt bad for the executioners. They were just doing their jobs, and that is not a snide comment. But I must say the sheer ignorance of life as an academic on display that day was appalling. The people offering “placement assistance” so obviously had never seen the stacks of rejection letters that are the norm for fledgling Ph.D.s, especially in Humanities, just trying to get a full-time gig. I had gotten my chance to be THE history professor, had given UU seven years of nearly year-round teaching, had earned tenure under the old system even though I had to defer my dream of publishing my manuscript, and had survived personal tragedy and unexpected mental and emotional struggles, all in an effort to be what UU needed. Dana and I had even joked that if we won the lottery we would make UU sustainable for our friends and future students. Alack. The blade sang as it fell...

Oh, and here is the picture I took when deciding whether or not to go to church. I decided not (I wasn’t feeling 100%). 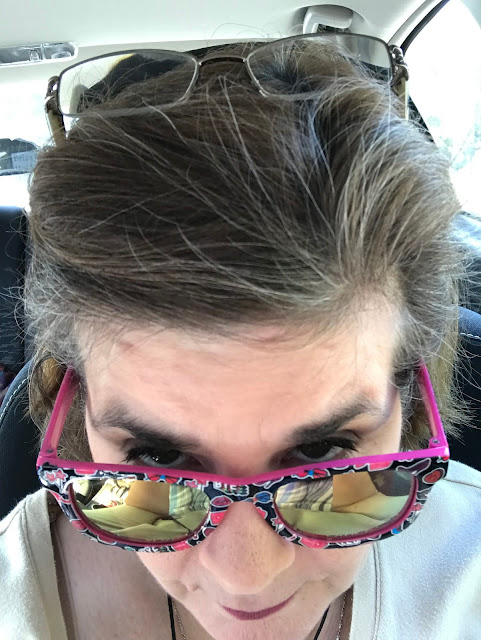 Monday, July 15th
I saw this GINORMOUS moth at work on Monday. Its wing span was as wide as my foot! I wish I’d gotten my foot in the picture so you could see. Whoa! 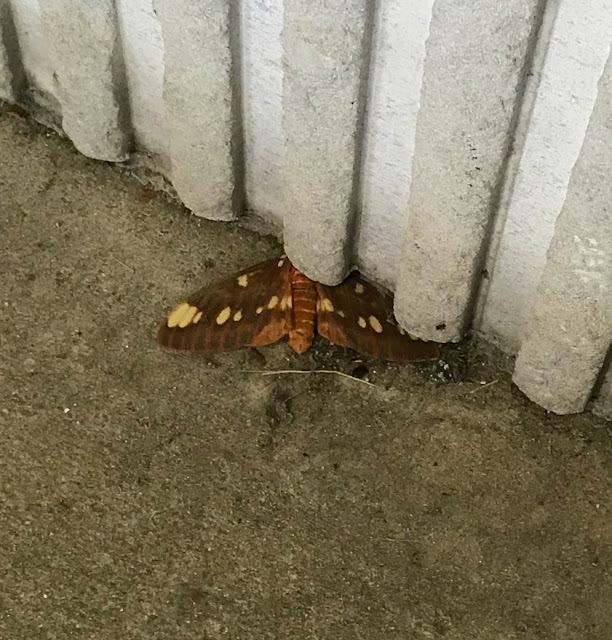 Tuesday, July 16th
New Feryl Designs jewelry. I might need some sort of help for my addiction. (She’s having a July sale – I can hook you up with the coupon code if you like!) 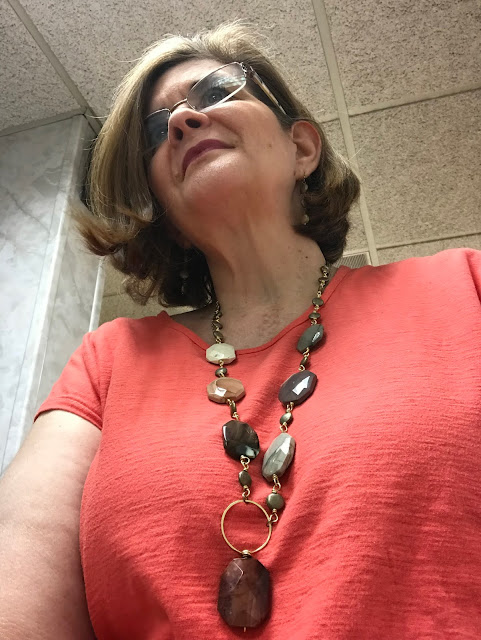 Wednesday, July 17th
I was eating lunch at my desk & reading my book when both of my worlds collided! Freaky! 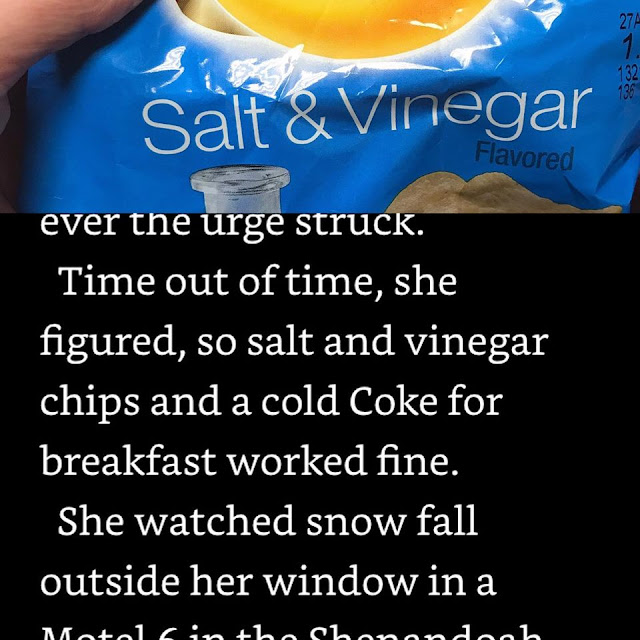 Thursday, July 18th
Who needs to go to the fancy schmancy theater when you can watch movies from the comfort of your armchair? This is how Dr. M is trying to keep himself busy while waiting for surgery (July 29th!). 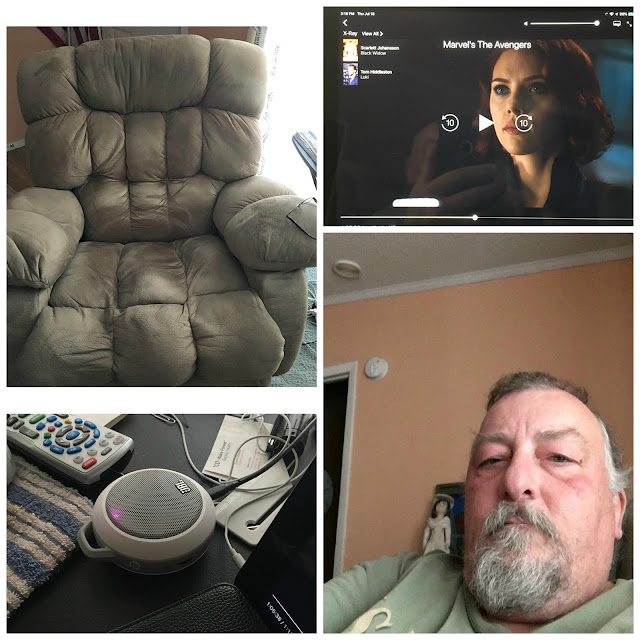 Friday, July 19th
I posted this rant on Facebook on Thursday, but since there’s no picture for today I’m doing to post it here. It was in response to this article, about the crowds shouting “Send her back!” at a Trump rally in Greeneville, NC: I haven't been talking about this because I don't like controversy & I'm not really politically eloquent (and I also know that these are stunts to get liberal softies like me to lose it). But for heaven's sake (literally - what the heck Christians?). I don't want my silence to imply that I approve of our president telling congress members to "go back" to where they came from. They came from districts who elected & sent them forth to work for their interests. They're right where they belong. It also is clearly racist, and another strike against women. That's how we're making America great? Letting a man who objectifies and apparently dislikes women (except for one thing) guide our country? A man who clearly dislikes people of color? He is supposed to be the president for ALL of us. And I'm just so sad and angry that he's apparently the president that so many people wanted. And now I'm going to be late for work.

Saturday, July 20th
I had to laugh when I posted this picture on Facebook yesterday – my caption was that it was “a dry shampoo no makeup kind of day. Too bad I can’t carry this insta filter with me to the grocery store!” Folks apparently missed the part where I didn’t really look like this (for example, I have no idea how to make my lashes look like that). It was just the Instagram filter making me look all glamorous – in reality I should maybe have not left the house. Ha! 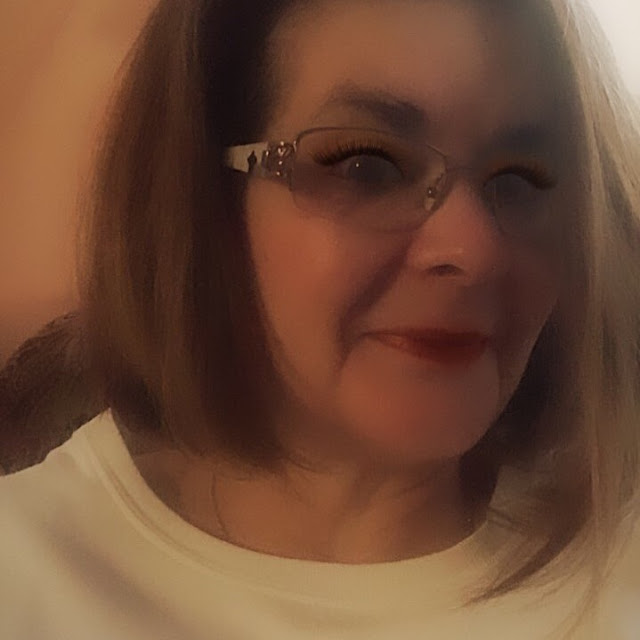