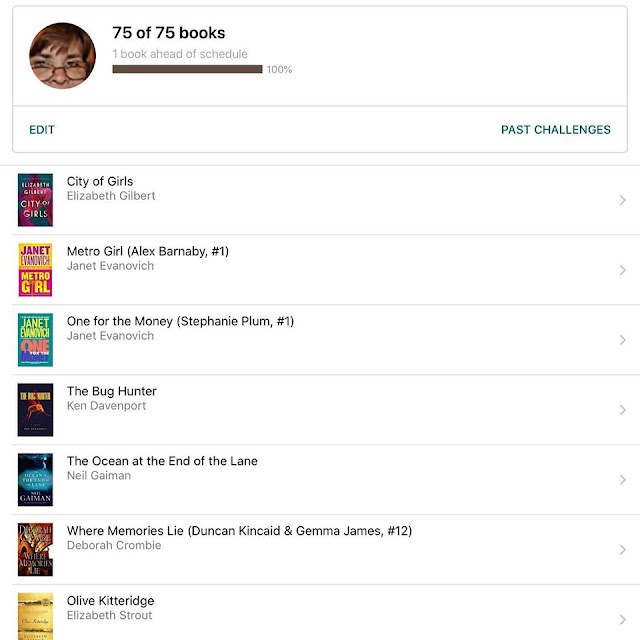 I had a goal this year of reading 75 books. I’ve spent the last few years zoning out playing games on my iPad, or crocheting, and have neglected my reading quite a bit. It doesn’t help that when we moved from Ohio my commute went from 50 minutes each way to 0 minutes for one year, and then 25 minutes each way after that. I lost a lot of valuable audiobook time. Not that I’m complaining! In any case, I decided to be more intentional this year, and I amazed myself by actually reaching my goal with a couple of days to spare! I was especially pleased because I basically took the month of July off to listen to Annie F. Downs’ EnneaSummer 2019 podcasts. (I need to do an enneagram blog post sometime. Not that I know what I’m talking about, really – but when has that stopped me?)

Anyway, I decided that instead of doing a post of all the books I’ve read this year I would just highlight the ones that I gave 5 stars to. Please realize that I am almost always delighted by books and give higher ratings than most people do. But if I give it 5 stars then that means I really really loved it. (Descriptions are from Goodreads.)

·         Big Sky (Jackson Brodie, #5), Kate Atkinson. Jackson’s current job, gathering proof of an unfaithful husband for his suspicious wife, is fairly standard-issue, but a chance encounter with a desperate man on a crumbling cliff leads him into a sinister network—and back across the path of his old friend Reggie. Old secrets and new lies intersect in this breathtaking novel by one of the most dazzling and surprising writers at work today.
·         The Ocean at the End of the Lane, Neil Gaiman. A groundbreaking work from a master, The Ocean at the End of the Lane is told with a rare understanding of all that makes us human, and shows the power of stories to reveal and shelter us from the darkness inside and out. It is a stirring, terrifying, and elegiac fable as delicate as a butterfly's wing and as menacing as a knife in the dark.
·         City of Girls, Elizabeth Gilbert. Beloved author Elizabeth Gilbert returns to fiction with a unique love story set in the New York City theater world during the 1940s. Told from the perspective of an older woman as she looks back on her youth with both pleasure and regret (but mostly pleasure), City of Girls explores themes of female sexuality and promiscuity, as well as the idiosyncrasies of true love.
·         Dear Committee Members, Julie Schumacher. The vehicle this droll and inventive novel uses to tell that tale is a series of hilarious letters of recommendation that Fitger is endlessly called upon by his students and colleagues to produce, each one of which is a small masterpiece of high dudgeon, low spirits, and passive-aggressive strategies.
·         In the Company of Cheerful Ladies, Alexander McCall Smith. In the newest addition (#6) to the universally beloved No. 1 Ladies’ Detective Agency series, the charming and ever-resourceful Precious Ramotswe finds herself overly beset by problems. As usual.
·         The Feast of Love, Charles Baxter. In vignettes both comic and sexy… disparate people joined by the meanderings of love…come together in a tapestry that depicts the most irresistible arena of life.
·         Good Omens: The Nice and Accurate Prophecies of Agnes Nutter, Witch, Neil Gaiman & Terry Pratchett. According to … Agnes Nutter, the world will end on a Saturday. Next Saturday, in fact. Just before dinner…So the armies of Good and Evil are amassing, Atlantis is rising, frogs are falling, tempers are flaring. Everything appears to be going according to Divine Plan. Except a somewhat fussy angel and a fast-living demon—both of whom have lived amongst Earth's mortals since The Beginning and have grown rather fond of the lifestyle—are not actually looking forward to the coming Rapture. And someone seems to have misplaced the Antichrist . . .
·         Olive Kitteridge, Elizabeth Strout. As townspeople grapple with their problems, mild and dire, Olive is brought to a deeper understanding of herself and her life–sometimes painfully, but always with ruthless honesty. Olive Kitteridge offers profound insights into the human condition–its conflicts, its tragedies and joys, and the endurance it requires.
·         The Wind in the Willows, Kenneth Grahame. Begun as a series of letters from Kenneth Grahame to his son, this book is a timeless tale of animal cunning and human camaraderie.
·         The Red Tent, Anita Diamant. This book is a fictionalized account of Dinah, daughter of Leah and Jacob (from the Bible). Told in Dinah's voice, this novel reveals the traditions and turmoils of ancient womanhood--the world of the red tent. It begins with the story of her mothers--Leah, Rachel, Zilpah, and Bilhah--the four wives of Jacob.

·         Becoming, Michelle Obama. In her memoir, a work of deep reflection and mesmerizing storytelling, Michelle Obama invites readers into her world, chronicling the experiences that have shaped her—from her childhood on the South Side of Chicago to her years as an executive balancing the demands of motherhood and work, to her time spent at the world’s most famous address.
·         Inspired: Slaying Giants, Walking on Water, and Loving the Bible Again, Rachel Held Evans. Undaunted by the Bible's most difficult passages, Evans wrestles through the process of doubting, imagining, and debating Scripture's mysteries. The Bible, she discovers, is not a static work but is a living, breathing, captivating, and confounding book that is able to equip us to join God's loving and redemptive work in the world.
·         Miracles and Other Reasonable Things: A Story of Unlearning and Relearning God, Sarah Bessey. A deeply moving and life-affirming account of wrestling with faith and God and finding miracles in the most unexpected places.