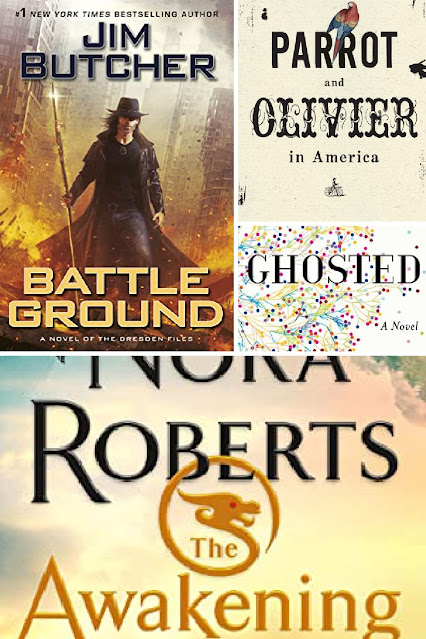 Amazingly, I was able to finish four books in November. I’m still not sure I’ll reach my Goodreads goal of 60 for the year (and that’s down from 75 last year!). Such a weird book year.

1. Ghosted, by Rosie Walsh. ★★★★ When Sarah meets Eddie, they connect instantly and fall in love. To Sarah, it seems as though her life has finally begun. And it's mutual: It's as though Eddie has been waiting for her, too. Sarah has never been so certain of anything. So when Eddie leaves for a long-booked vacation and promises to call from the airport, she has no cause to doubt him. But he doesn't call.

Sarah's friends tell her to forget about him, but she can't. She knows something's happened--there must be an explanation.

Minutes, days, weeks go by as Sarah becomes increasingly worried. But then she discovers she's right. There is a reason for Eddie's disappearance, and it's the one thing they didn't share with each other: the truth.

The Bug Says: I enjoyed a lot of aspects of this book. The characters were interesting, and I was pulled along waiting to find out the “twist” that I knew was coming. For me, it did not disappoint, although the ending might have been a little over the top.

2. Parrot and Olivier in America, by Peter Carey. ★★★ Olivier is a young aristocrat, one of an endangered species born in France just after the Revolution. Parrot, the son of an itinerant English printer, wanted to be an artist but has ended up in middle age as a servant. When Olivier sets sail for the New World - ostensibly to study its prisons, but in reality to avoid yet another revolution - Parrot is sent with him, as spy, protector, foe and foil. Through their adventures with women and money, incarceration and democracy, writing and painting, they make an unlikely pair. But where better for unlikely things to flourish than in the glorious, brand-new experiment, America? A dazzlingly inventive reimagining of Alexis de Tocqueville's famous journey, Parrot and Olivier in America brilliantly evokes the Old World colliding with the New. Above all, it is a wildly funny, tender portrait of two men who come to form an almost impossible friendship, and a completely improbable work of art.

The Bug Says: Someone had recommended another book by this author, but it wasn’t available so I thought I would try this one. It gets 3 stars instead of 4 because it took me a long time to get into it. I listened to the audio version & the parts of the story from Olivier’s point of view were hard for me to understand at first (very strong French accent!). But then I warmed to the characters and really enjoyed the descriptions of their experience in America.

3. Battle Ground (The Dresden Files #17), by Jim Butcher. ★★★★ Harry has faced terrible odds before. He has a long history of fighting enemies above his weight class. The Red Court of vampires. The fallen angels of the Order of the Blackened Denarius. The Outsiders.

But this time it’s different. A being more powerful and dangerous on an order of magnitude beyond what the world has seen in a millennium is coming. And she’s bringing an army. The Last Titan has declared war on the city of Chicago, and has come to subjugate humanity, obliterating any who stand in her way.

Harry’s mission is simple but impossible: Save the city by killing a Titan. And the attempt will change Harry’s life, Chicago, and the mortal world forever.

The Bug Says: As the title suggests, this book was one long battle. It took me FOREVER to read it because I just knew that someone I liked was going to get killed. And I wasn’t wrong. But still, such a good series! It also feels like the “old” Harry is back – well, as back as he can be while still being the Winter Knight.

4. The Awakening (The Dragon Heart Legacy #1), by Nora Roberts. ★★★★ When Breen Kelly was a girl, her father would tell her stories of magical places. Now she’s an anxious twentysomething mired in student debt and working a job she hates. But one day she stumbles upon a shocking discovery: her mother has been hiding an investment account in her name. It has been funded by her long-lost father—and it’s worth nearly four million dollars.

This newfound fortune would be life-changing for anyone. But little does Breen know that when she uses some of the money to journey to Ireland, it will unlock mysteries she couldn’t have imagined. Here, she will begin to understand why she kept seeing that silver-haired, elusive man, why she imagined his voice in her head saying Come home, Breen Siobhan. It’s time you came home. Why she dreamed of dragons. And where her true destiny lies—through a portal in Galway that takes her to a land of faeries and mermaids, to a man named Keegan, and to the courage in her own heart that will guide her through a powerful, dangerous destiny…

The Bug Says: I am always excited to start a new Nora Roberts trilogy. And I do enjoy when she weaves in magic and magical beings. This one was a lot of fun, but it’s just the beginning, so it left me eager to read more. I guess that’s not a bad thing.

I’m currently reading a Lemony Snicket book (trying to cheat and read short books to reach my goal). And I have a Dean Koontz waiting in the wings. We’ll see how it goes! Did you have any book goals this year & how have you done?