Book Reviews - the May Edition 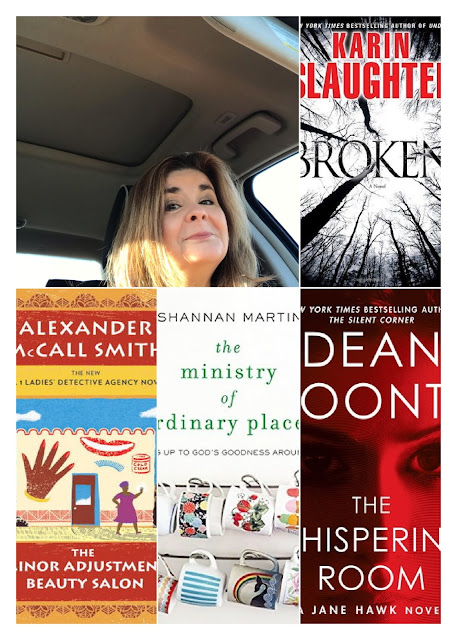 1. Fractured (Will Trent #4), by Karin Slaughter. ★★★★ When Special Agent Will Trent arrives in Grant County, he finds a police department determined to protect its own and far too many unanswered questions about a prisoner's death. He doesn't understand why Officer Lena Adams is hiding secrets from him. He doesn't understand her role in the death of Grant County's popular police chief. He doesn't understand why that man's widow, Dr. Sara Linton, needs him now more than ever to help her crack this case. While the police force investigates the murder of a young woman pulled from a frigid lake, Trent investigates the police force, putting pressure on Adams just when she's already about to crack. Caught between two complicated and determined women, trying to understand Linton's passionate distrust of Adams, the facts surrounding Chief Tolliver's death, and the complexities of this insular town, Trent will unleash a case filled with explosive secrets--and encounter a thin blue line that could be murderous if crossed.

The Bug Says: It feels weird to think back to this book because I’m going to finish book 5 today. I obviously like this series! One of the things I like and that also aggravates me is that all the people in the book are real – no caricatures here. They have real strengths and weaknesses and weird foibles. I get mad at them & root for them. I’m getting a little bit invested in these characters!
2. The Ministry of Ordinary Places: Waking Up to God's Goodness Around You, by Shannan Martin. ★★★★ For Christ-followers living in an increasingly complicated world, it can be easy to feel overwhelmed and unsure of how to live a life of intention and meaning. Where do we even begin? Shannan Martin offers a surprisingly simple answer: uncover the hidden corners of our cities and neighborhoods and invest deeply in the lives of people around us. She walks us through her own discoveries about the vital importance of paying attention, as well as the hard but rewarding truth about showing up and committing for the long haul, despite the inevitable encounters with brokenness and uncertainty. With transparency, humor, heart-tugging storytelling, and more than a little personal confession, Martin shows us that no matter where we live or how much we have, as we learn what it is to be with people as Jesus was, we'll find our very lives. The details will look quiet and ordinary, and the call will both exhaust and exhilarate us. But it will be the most worth-it adventure we will ever take.

The Bug Says: This is the second of Shannon’s books that I’ve read. I follow her on Instagram and I like her a lot. And I love the lesson in this book – being a good neighbor (literally) is what the Gospel is all about. There’s no need to plant yourself somewhere exotic and show God’s love to the people there – there are people right next door who could use that love.

3. The Minor Adjustment Beauty Salon (No. 1 Ladies' Detective Agency #14), by
Alexander McCall Smith ★★★★ Modern ideas get tangled up with traditional ones in the latest intriguing installment in the beloved, best-selling No. 1 Ladies’ Detective Agency series. Precious Ramotswe has taken on two puzzling cases. First she is approached by the lawyer Mma Sheba, who is the executor of a deceased farmer’s estate. Mma Sheba has a feeling that the young man who has stepped forward may be falsely impersonating the farmer’s nephew in order to claim his inheritance. Mma Ramotswe agrees to visit the farm and find out what she can about the self-professed nephew. Then the proprietor of the Minor Adjustment Beauty Salon comes to Mma Ramotswe for advice. The opening of her new salon has been shadowed by misfortune. Not only has she received a bad omen in the mail, but rumors are swirling that the salon is using dangerous products that burn people’s skin. Could someone be trying to put the salon out of business? Meanwhile, at the office, Mma Ramotswe has noticed something different about Grace Makutsi lately. Though Mma Makutsi has mentioned nothing, it has become clear that she is pregnant . . . But in Botswana—a land where family has always been held above all else—this may be cause for controversy as well as celebration.
The Bug Says: This might be my favorite book in this series. It’s a love song to Africa, to Botswana, and even to Mma Makutsi! I was just about to give up on this series because she has been driving me crazy, but this book redeemed her (or at least made me feel more kindly). Oh, and this is the book I was listening to when I made that “daw” face – it was a very sweet moment with one of the more irascible characters in the book.


4. The Whispering Room (Jane Hawk #2), by Dean Koontz ★★★★ In the wake of her husband’s inexplicable suicide—and the equally mysterious deaths of scores of other exemplary individuals—Jane picks up the trail of a secret cabal of powerful players who think themselves above the law and beyond punishment. But the ruthless people bent on hijacking America’s future for their own monstrous ends never banked on a highly trained FBI agent willing to go rogue—and become the nation’s most wanted fugitive—in order to derail their insidious plans to gain absolute power with a terrifying technological breakthrough. Driven by love for her lost husband and by fear for the five-year-old son she has sent into hiding, Jane Hawk has become an unstoppable predator. Those she is hunting will have nowhere to run when her shadow falls across them.
The Bug Says: This book was sometimes so intense that I found myself holding my breath. At the same time it was very measured with the drama building and exploding and building and exploding… It was exhausting! It is written in Dean Koontz’s usual style, which may or may not suit you. The only thing missing is a dog.

I’ve finished one book so far in June (the one where I posted the picture of my disgusted face), and I’ll finish another one today. And I just started a mystery written by Stacy Abrams! What have you been reading?
at June 16, 2021