These pictures make it look like spring has definitely sprung, but I had to pull my winter coat back out last week because it was in the 30s a couple of days when I was heading to work. Did I need it when it was time to go home? Of course not. So, I guess that is the definition of spring, really.
Sunday, April 3rd
Things I did on Sunday: mall walked with my dad (I apologize for the just-rolled-out-of-bed face), took a picture of a robin in one of his trees (yes it’s there), ate a Nutty Mixed Up Salad from Jason’s Deli (you are what you eat), worked the Thomas Kincaid puzzle from hell (no photo), and planted some wildflowers (that may or may not actually grow). It was a good day!
Monday, April 4th
Blue Moon Phlox! Yes, it’s really purple. No I don’t know why its name is Blue. We especially like the little tightly curled petals before they open up.
Tuesday, April 5th
I was so tired Tuesday evening that I put my day moisturizer on instead of my night one (the main difference is that the day one has sunscreen). I asked people on social media if it might keep me awake, but the response mostly seemed to be that I’m a drama queen. Can’t argue with that!
Wednesday, April 6th
The recipient of my other scarf giveaway posted a picture – I was glad to see that it arrived!
Thursday, April 7th
Opening day!! I loved that they had Joey Votto mic’d up. He used to be someone who was very taciturn, but he’s decided to change his image & he is hilarious. It was a fun night.


I posted these photos on my Enneagram 9 page talking about how I’ve been switching up the glasses that I wear & that no one had commented on it (the consensus is that people either don’t notice things like that, or that since you can get frames pretty cheaply these days people wear different glasses all the time). But what struck me as funny is that people kept saying they liked the “black” glasses better. People. I guess they are black, but they have a blue pattern on the temples so in my head they have always been blue. So the moral of the story is why should I expect that people notice my glasses when I don’t even notice what color they are? Ha! 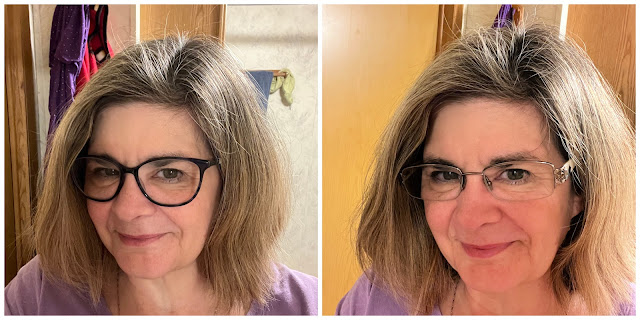 Friday, April 8th
Dr. M’s mother’s azalea is just gorgeous!
Saturday, April 9th
My latest culinary creation – sliced apple, lemon pepper tuna, & cheddar melt sandwich. I fixed it in the air fryer and it was FABULOUS. The best part was the crunchy cheese. Yum!
Meanwhile, Dr. M caught this bluebird out front. He is so bright!
Things are a little fraught at work. We are a small department (9 team members) and by the end of this month we will have lost four of them, including our director and assistant director. And benefit open enrollment for 600 employees starts next week (I’m in charge of this process). I alternate between panic and reminding myself that I am Not In Charge of the whole department and to just keep doing what I do. Oof.  Are you facing anything scary lately?