One Year of the Bug, or Hasn’t Someone Called the Exterminator Yet?


I don't know if you noticed that I changed my look. It's all Jayne's fault. I spent two hours piddling around Wednesday night until I came up with something I liked. Mostly. There are a couple of things I don't like, but it was 11:00 and the Dayton basketball game was going off and I was done. I decided to make the change in honor of spring and my blogoversary!

Yes, I created my blog one year ago today. I had been wandering around the blogosphere reading and commenting and suddenly I was hit with an irresistible urge to join the fray. I think there might have been a virus going around.

At the time I thought that I would be totally anonymous so I could say what I thought. But as I may have mentioned in this post, I over-share. Couldn't keep it to myself. Next thing I knew I was emailing my blog to my dad, my sister-in-law, a cousin and four aunts. So, yes, there are now things that I wouldn't want to write on here. And that's ok. That's what therapy is for. If I were in therapy. Which maybe I should be.

Anyway, another goal besides emptying the contents of my head onto the World Wide Web was to have an outlet for my writing. You know, that stuff I did from the time I knew what a poem was (5th grade. My first effort was Sally Jo's Curtains. If you make me mad I'll share it with you.) until . . . I don't know exactly what happened. Actually I do know what happened. I wasn't in school anymore & there was no one telling me, "WRITE!" So I didn't.

I don't know what I think about what I've written in the last year. We're our own worst critics, aren't we? And just because I love it doesn't make it good. But I am so happy (this should be said the way Maid Marian says it in Robin Hood, Men in Tights) to be back in the mode of seeing life through my fingertips.

Now I have to go write a poem about a yellow flower. 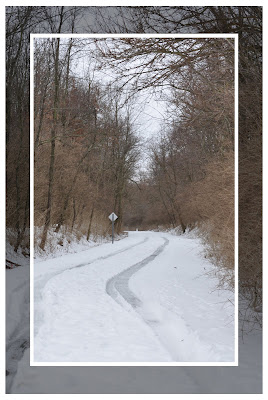 The road is no longer snowy, but shall we travel down it together a while?
at March 26, 2010