An Open Letter to the Virginia DOT

I was merrily barreling my way north on I-71 (with my sweetie riding shotgun – a witness, if you will) and noted that there were men in orange vests with shovels by the right side of the road. I was in the middle lane. As I approached the little band of workers, one of them dipped his shovel into a bucket, and during a lull in traffic, took the contents of the shovel blade & flung it at a pothole in the right lane. You may find this hard to believe, the (What? Gravel?) did not actually make it to the pothole. The (What? Sediment?) scattered across the pavement like marbles hit by an aggie (another marble - not a Texas athlete).

In future you might want to consider a more efficient way of filling potholes. Perhaps employing a few of the orange barrels in your possession. Just an idea.


I, the undersigned, did witness the above described action on March 14, this annum, and do attest to the veracity of the above statement. I further make additional comment for the VA-DOT's consideration. While one commends the VA-DOT for its efforts to fill the myriad potholes left by the ravages of an unusually harsh winter, flinging by shovel some Asphalt concoction in the above mentioned pothole's general direction during lulls in traffic MIGHT not be the most effective means by which to repair said pothole. 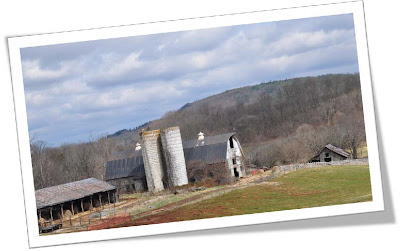 This picture has nothing to do with the above-matter - but we took it while travelling through Virginia on the very day that the incident occurred.
at March 16, 2010