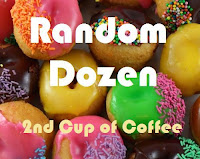 The Random Dozen is hosted by Linda at 2nd Cup of Coffee. Go there to check out the answers other folks gave to these questions. You might learn something interesting! As opposed to here where you're mostly going, "Huh?"

This week Linda informed us that George Washington has a couple of overdue books at one of NYC's oldest libraries. They were only due November 2, 1789. Libraries are so strict!

OK, here are this week's questions, and my questionable answers:


1. Ever had any run-ins with the "library police?" I am one of those obsessive people when it comes to library fines. In general, the only time I owe them is when they won't let me renew the book & I'm not done yet. Dr. M says – just finish the book & pay the fifteen cents already! But it makes my heart hurt to think I'm depriving someone else of the joy of the book (I don't really care about the fifteen cents).

2. Do you have a special organizational plan and place for wrapping paper, gift bags, etc., or do you just purchase whatever you need as you give gifts? I do have a place for gift wrap, etc. – a bin we keep under the bed. And, I'm ashamed to say, that sometimes just to keep from having to crawl under the bed to get it I will buy something at the store instead.

3. Have you ever been in (first-hand witness) a natural disaster? Does the Blizzard of '93 count? It was while we were living in the Asheville NC area. I remember my boss called me from the office wondering where I was. He had cross country skied in. He was obviously joking. Wasn't he? What I remember most from that event was that we never lost power – although we did lose cable. Bummer. (P.S. I'm making light because it was not really a big deal for us, but for many other people it really was a disaster).

4. What's your favorite Barry Manilow song? My dad calls him Barry Monotone. And I must admit that listening to an entire album can be mind-numbing. But I can't help it – I love most of his music! So it's really hard to pick, but I'm going to go with the obvious (at least to me) & pick Copacabana. Her name was Lola. She was a showgirl… you probably don't really want to hear me sing this. Heh. 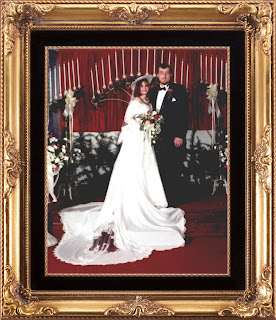 5. What's the best costume you've ever worn?  My wedding dress! Well, it felt like a costume – all girly & fancy. Hmmm. If I don't pick that, then I'll go with my flapper costume. 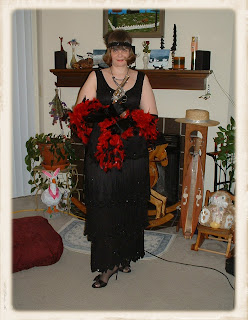 6. Which do you use more often, the dictionary or the thesaurus? The thesaurus. The advent of spell check means that I very rarely use a dictionary but I'm always looking for a new way to say something.

7. What's your favorite breakfast food? It used to be French Toast – yum! But now when I wake up I want something more savory, so I crave grits, eggs & livermush. Yum!

8. Have you ever purchased anything from an infomercial? The Tony Little Gazelle! I've had the thing for years. Sadly, I use it only sporadically. Which may be why it's lasted so long.

9. Have you ever crawled through a window? I can't believe it, but I don't remember ever crawling through a window. Although I have a vague recollection of squishing myself through a car window, it's possible that I'm just imagining that scenario. Because who doesn't want that image in their mind?

10. Do you believe in love at first sight? I have never experienced it with a person, but that doesn't mean it couldn't happen. Dr. M and I gravitated toward each other gradually. Now, if we're talking food or handbags, then I've had love at first sight MANY times.

11. How many pairs of jeans do you own? Do we count the ones we can't wear right now? Let's not. The ones that can make their way over my current booty are five in number – but I mainly only wear three of them. The reason I have so many (I'm usually a wear them until they shred kind of person) is that we often get the opportunity to pay money to wear jeans at work and my coworkers notice if I wear the same pair every day. Why do they have to be so observant? I'm wearing jeans right now because I donated to the March of Dimes for the privilege for the month of April.

12. If someone were going to bake a cake to honor/represent you, what would it be? (Think creatively, like Duff and Crew on "Ace of Cakes.") Opus from Bloom County. Isn't he the cutest thing? Now that I think about it, why hasn't anyone done this for me before? I love bakery cake. Would it have been so hard to have the Kroger make one in the shape of a penguin? Hmmm? 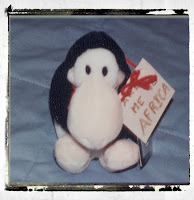