18 Days of Christmas - The Sixteenth Day 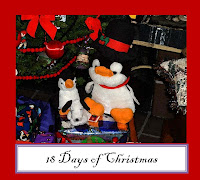 From now until Christmas day I am treating you to foisting upon you our collection of Christmas poems. If I made our cards that year I'll post a picture of that as well. If you missed yesterday's poem, click on the 18 Days of Christmas button in my sidebar. The way you can tell who wrote which poem is to note whose name is listed first at the end.

We're on the home stretch! I know I'm relieved - how about you? I sent out a few homemade cards this year, but everyone else got store-bought (well, charity-bought, actually). We did include a picture of a manger scene (purchased from Ten Thousand Villages) with a penguin placemat underneath it - we thought the incongruity matched the poem pretty well. The angel is a bridesmaid's favor from the wedding of the very cousin mentioned in the poem (hey Kim - up with penguins, down with bears!).


Penguins are in this year,

More so than polar bears,

Though dear cousin cares not

For this dreadful fad.

Worse yet, I bet you’ll see

Lots of pairs of penguins

And bears, though in nature

No such habitat exists.

Still, this is Christmastime

And as we cruise the cities,

With lights and sounds,

I am amazed by the many

Displays that, in their own way,

Show respect to the simple manger,

Holy Crèche, where our savior saw

We have not forgotten you. 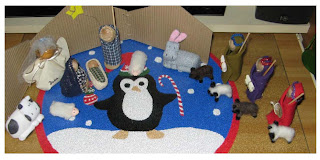