His Name Was John


Daddy's wife Amy wrote this essay about her first husband for the Literary Arts section of the local Senior Games this year – she won the gold medal for her effort & is entering it in the state Games later this summer. I know I was impressed! I decided it was appropriate for Memorial Day. 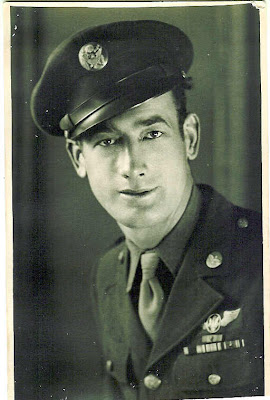 He walked, slowly and painfully, shuffling his tired, sore feet over the dusty ground, head bowed, eyes unseeing, just moving forward, always moving. His body was emaciated, covered with dirt and vermin, his clothes in rags, and boots worn thin. He was tired, so tired. It was tempting just to lie down and sleep for a time, but he knew he would be left to die. Some of his fellow prisoners had already fallen, too weak from hunger to go on. Hadn't his best friend dropped to the ground a few days earlier? Ignoring the guards order to move on, John turned back for his friend, carrying the limp body on his own tired shoulder until the soldier could walk again.

How long had they walked? He couldn't remember, and there was no strength to dwell on anything but survival. Having endured months of interrogation, torture, cold, hunger, and fear, he would not allow the enemy to win now. After all, he was an American soldier, trained to survive in any situation, even as a dreaded prisoner of war. His shoulders straightened slightly and he moved forward with new resolve. He would survive!

He was so hungry. He'd had nothing to eat for days. There was no food for anyone. His thoughts went back to the camp they'd left at Nuremburg, before their long walk into the German countryside. They'd had a little food then, a bit of moldy cheese, a raw turnip, and an occasional bowl of thin cabbage soup. How he hated cabbage! Once free, he vowed never to eat that vile tasting vegetable again. He took comfort from that decision.

Glancing at the guards walking beside him, he realized that they were tired and hungry too. They were old men, too old to fight in combat, but they had guns and orders to keep the prisoners ahead of the American forces at any cost; thus the hurried movement with little sleep and less food.

To help pass the time, John willed his mind to focus on earlier days in his life, before this war began. The images were vivid now. He could almost smell his mom's cooking, feel his warm bed, and see the farm with its vast corn fields, the earth warm beneath his bare feet. When he was older, he played on a semi-professional baseball team. He had a good pitching arm. There was an old car, friends, and enough money to enjoy life. The happiness he had known then surrounded him now like a warm blanket.

Was it just three years ago? What had happened? Pearl Harbor! His country had been invaded by the enemy. Soon he volunteered for service, choosing the Army Air Corps. He'd always been fascinated by planes. His mind went back to the day he left for basic training, his mother's sad, tear-filled eyes and his father's rough face filled with pride as they said goodbye. He'd promised them he would return.

For basic training, he was sent to Fort Bragg. Then came the rigorous routine – the skills needed for combat and survival, instilled with the mindset of a soldier, and then assignment to the elite crew of a B-24 heavy bomber. The crew was stationed in England, becoming part of the European Theatre of Operation. They worked as a close-knit team. Their mission – provide cover for allied ground troops and destroy enemy strongholds. As nose turret gunner, he was highly skilled and took pride in his abilities and in his B-24 bomber, which they had nicknamed "Jest for Laughs." He remembered how they would fly out over the English Channel in the early morning fog, complete their assigned mission and fly back to base under the cover of darkness, often with just enough fuel to set down safely. They were aware of the danger involved, but nothing would happen to them. They were indestructible.

Seeming to lead a charmed life, the "Jest for Laughs" and its crew had completed twenty six successful missions. Four more assignments and he would go home for a long furlough. It would be nice to be back on American soil in the safety of home and family for a change. Air raids, enemy fire, and exploding bombs were increasingly stressful.

One day, his crew received orders for their next assignment. The briefing was detailed. If the mission went as planned, it could change the course of the war. The bombers would help clear the way for allied ground assaults, a massive invasion of strategic enemy strongholds. He knew the Germans were fierce and relentless opponents, but there was no doubt that the Americans would be successful. He was confident and ready.

On Tuesday, June 20, 1944, in early morning, the crew left its base. They were all in place, John with his long frame folded into the nose turret. He could feel their strength and determination. They were a team with a single purpose. All was well.

As the crew flew low over Politz, Germany their first bomb drop, he saw anti-aircraft fire. The sky around him was filled with a deafening sound. He felt a jolt as the big plane lurched to its side, then straightened slightly. One engine on fire, the bomber started a slow descent. At that time, the pilot gave the order to bail out. John's trap door was jammed. Pushing with all his strength, his head and shoulders emerged into the cockpit. Near the hatch lay the lifeless body of his co-pilot. There was no time! He was told again to jump. The pilot would go last.

As the parachute opened, he looked below and saw German soldiers, their guns raised, following him down. He was scared, very scared. He saw his beloved "Jest for Laughs" in the distance as it exploded into flames. He knew the procedure. He would not divulge any information that would endanger even one fellow American soldier. He would only give his Army serial number. As his body hit the ground, he felt a searing pain in his leg. Looking down, he saw his pants leg soaked with blood. He had been wounded by flack.

Next came the rough treatment, interrogation in a language he could not comprehend, punishment when he could not or would not answer, threat of imminent death, torture, and lies, lies, lies. Put in isolation, with little food or sleep, he was interrogated and punished daily. He was told repeatedly that the Americans would never look for him. He was presumed dead. He did not even have a name, only a number. Later, he and a dozen other prisoners were moved to a camp at Nuremburg and assigned to one small room. As staff sergeant, he was responsible for the group. Each day was recorded by a scratch on his wall, but these days were also etched in his mind. Had it really been ten months?

One day, as he worked in the fields, John overheard a guard giving orders for the camp to move out quickly. The Americans were advancing ever closer. The war in Germany was coming to an end. German officers, however, were determined to keep the prisoners, as perhaps a bargaining tool. Very little time was needed for him to break camp. There were only the tattered filthy clothes on his back and a worn blanket which also served as his bed. He had no identification or any personal belongings. One thing he did have, however, was his determination to survive. The Germans could not take that from him.

Just the fact that they were on the move was encouraging. He liked being out of that camp. Also, after months of infection in his leg, the flack wound had finally healed. He would never forget the kind German farmer who had wrapped the open sore in plantain, a leafy wild herb. The wound had healed quickly then. Walking was easier now. His body felt stronger and he had renewed purpose to stay alive until rescue came. He looked around at the sad, pathetic men who were left from his camp. They were so young, some only eighteen. He willed them to be strong and have courage.

A nearby noise got his attention. He turned to see that an old German guard had fallen, his rifle clattering on the ground. Without hesitation, John helped him stand again, picked up the rifle, took the man's arm and continued to walk. The other guards did not attempt to take the rifle from him. They were too tired to care.

Planes were circling overhead – American planes. The prisoners waved in anticipation. Leaflets were dropped with the message that liberation was near.

In minutes, John heard a loud rumble. He couldn't believe what he saw. Moving toward his pitiful group was a convoy of Army trucks. He was amazed as the trucks stopped in a cloud of dust. The 3rd Army had arrived. A few prisoners had been picked up from other camps and were already on board. He spotted the pilot and bombardier from his old crew. He felt his heart would explode with gratitude and relief.

American soldiers jumped from the trucks to assist the prisoners, some of whom lay on the ground, too weak to move. Others crawled, walked, or ran toward the trucks. There was much laughter and tears. John stood, stunned, as the legendary General George Patton himself stepped down from the lead truck and walked toward him. Staff Sergeant John Sides, Army Air Corps, pulled himself erect and stood at attention to salute. Eyes moist with tears, General Patton said, "At ease, soldier.

What's your name and in what camp were you detained?" John replied, "Serial # 14196510, Sir!" General Patton, grinning broadly, responded, "I'm proud of you soldier, and I should be saluting you. Thank you! Now let's go home."

John was overcome with emotion. He was safe now. It was over. He had fulfilled his duty as an American soldier. He had survived. The date was May 8, 1945. He was not yet twenty one years of age.
at May 31, 2010