This is the two year anniversary of my blog. If you’d like to read my first post, go here. It’s about Lent. At the time I had assumed that I’d come up with a “voice” for my blog eventually, and I guess I have – it’s my voice, in all its scattered glory.

What a crazy week this has been. Dr. M has worked late most nights & only took two of the pictures below (I know! It’s usually the other way around). I’m very proud of him – he was named Advisor of the Year at school for the great work he’s done with the history club. Go Dr. M!

Sunday, March 20th
Here’s the weekly squirrel. Just getting him out of the way early this week. 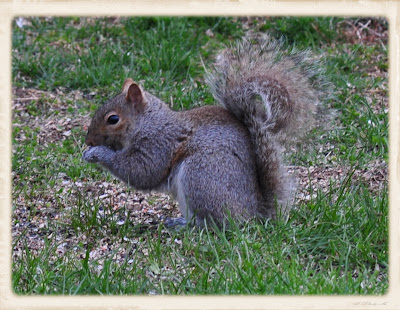 Here’s my terribly cute rental car – a Ford Focus. It looks right at home there beside the Bugly. 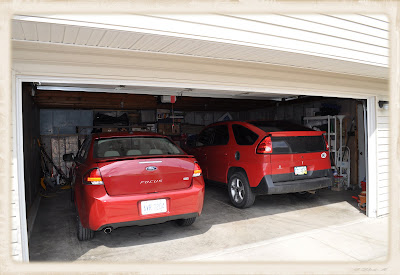 There’s a moon in the sky! It’s called, the moon! 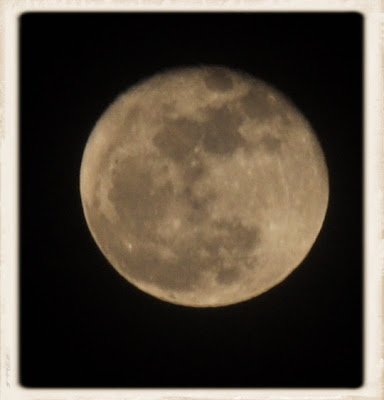 Monday, March 21st
My poor beleaguered car getting towed to the Chevy dealership. This tow guy wasn’t as cute the one from Saturday – and he was one of those infuriating people who thought he knew what was wrong with the car from looking at it & obviously didn’t need to hear what “the little lady” had to say about it. Grrr. 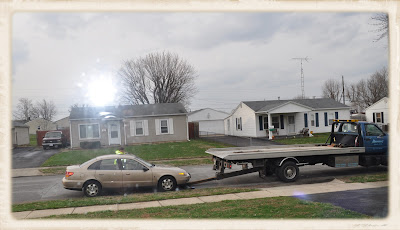 Tuesday, March 22nd
OK, so I think the Tax Time Pig is a girl now. Or a transvestite. It’s just so hard to tell with a pig! I guess she’s ready for spring with her grass skirt thing going on. 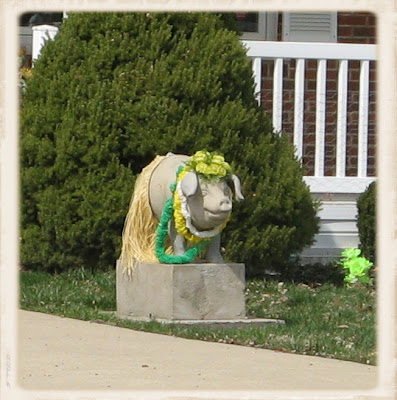 Here’s the State of the Bug. I thought I was terribly clever with my red lips & red shirt matching the red car, but then I looked at the picture & YOWZA! My hair sure clashes with all that red something FIERCE. {Shudder} 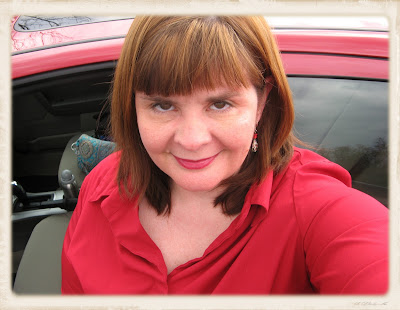 Wednesday, March 23rd
It was a Simpson’s sky on Wednesday – gorgeous! 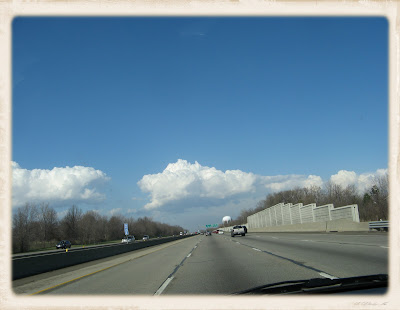 I finally remembered to start my tomato seeds. First of all, Dr. M had gotten me this starter kit. 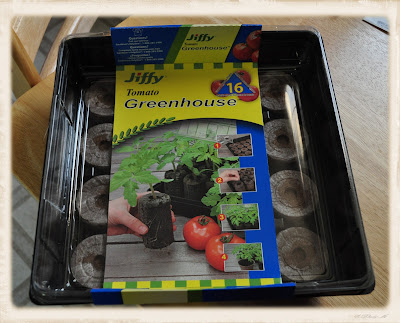 Then I totally drowned it in water & the little pod things got really unruly. 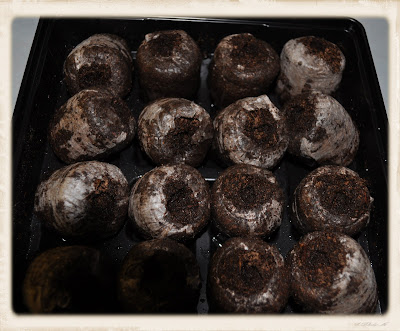 Here they are after I corralled them & planted the seeds. Mostly tomatoes & a little basil. Um – last year we ended up with four really healthy tomato plants & had almost more tomatoes than we could manage. I think that perhaps I didn’t really need to plant seeds in ALL the pods. Oh well, with any luck I can run a little tomato stand in the front yard come June or July. 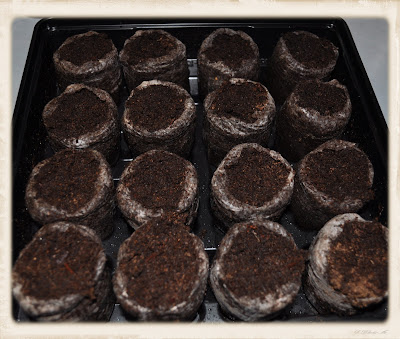 Thursday, March 24th
We got the car back on Tuesday, but I was still driving the rental (we got a cheaper rate for a week). I loved the instrument panel. I felt all James Bond when I drove it. And I LOVE that it told me how many miles I had to go before I ran out of gas (it started at 50 miles to go). 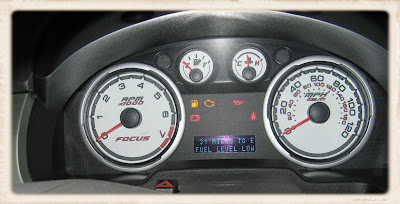 Doesn’t this look like an apocalyptic sky? Especially, if you click on the picture to make it larger, you can see a jet tail in there – makes me think of a missile or something. 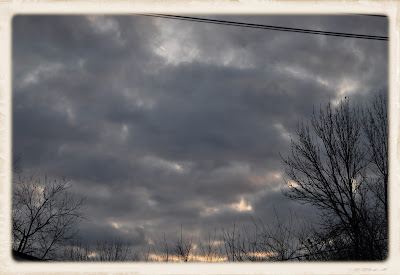 Friday, March 25th
I stopped to check out the sheep & donkeys on my way home. I love this picture best for some reason. 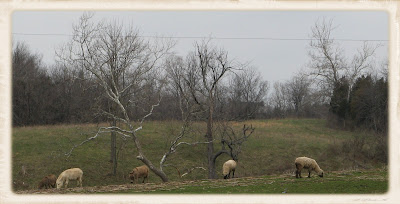 Dr. M had a late gig at school, for the third night in a row, and I decided that I’d had enough fast food. So I actually prepared a meal for myself – teriyaki chicken, pierogies & my dad’s green beans. I know that looks like a lot of pierogies for one person – but that’s all I really wanted to eat – the chicken & green beans are just the beard* to make it look like a real meal. Except I ate them too. Glutton! 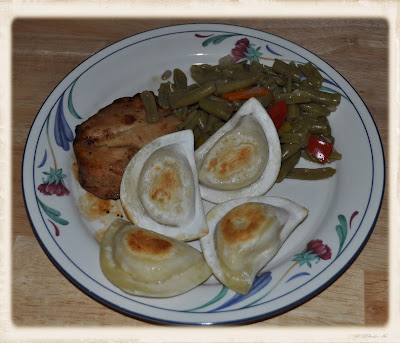 Saturday, March 26th
Today I went to Columbus to have lunch with a friend & then check out the Ohio Craft Museum because it’s the last weekend of the Texas Chair Project – which contains a chair made by Ellen Abbott & her husband Marc Leva. The whole exhibit was really cool & Ellen & Marc’s chair is pretty fabulous. I took a picture with it to prove I was there, but my arm isn’t really long enough to get a good picture with our Nikon. I’m posting it anyway! 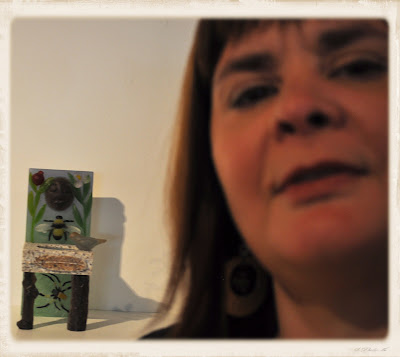 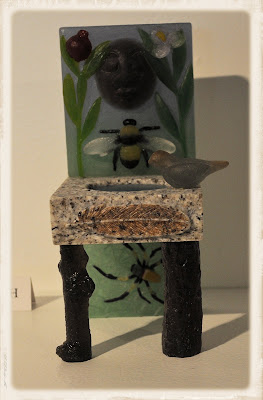 Here are a couple of the other little chairs. 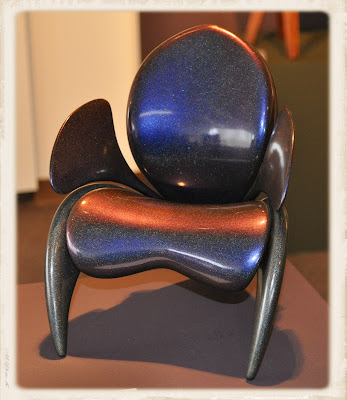 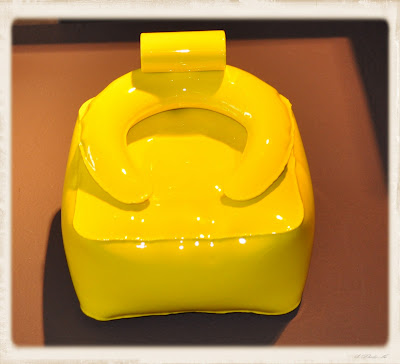 And here are a couple of the Artful Chairs – the larger ones made by mostly Ohio artists. 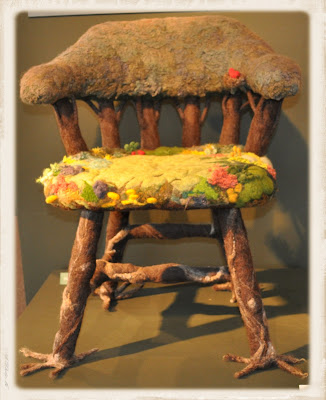 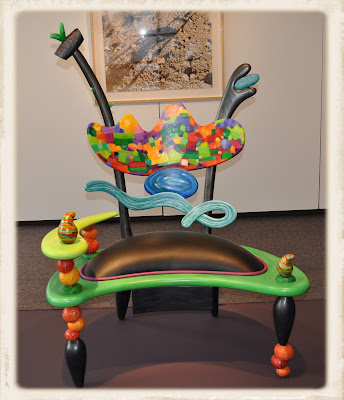 I enjoyed my visit to the museum – and I must say that this Saturday has been much better than the last one!

Go to Sara’s blog here to see the blogs of all the other Project 365 participants.

* A "beard" is a person of the opposite sex who marries or dates a closeted lesbian or gay person to cover up their homosexuality. In the past, often lesbians married gay men so that both could "pass" as straight, either for work or for their families. From About.Com.