It’s all about Me Me Me*


So I sang & it was fine - & the choir is on hiatus until fall. Which is good because I thought I might sweat to death in that robe LOL. I received a number of compliments which I took with a grain of salt – because that's me. I don't really believe it. I'm not fishing for compliments people – just telling it like it is. I'm a cynic. It's ok – it certainly won't stop me from singing again!

I'm going to whisper here because I'm afraid to say it out loud, but I'm trying again to be healthier. I'm doing Weight Watchers this time because it has worked well for me in the past. I'll keep you posted.

I'm listening to another audio book that's driving me crazy. I'm pretty sure it will end well (Fern Michaels doesn't usually disappoint), but I might have to murder the main character before that point. I'm sure people who've seen me driving this past week are wondering why I hate my steering wheel – I keep banging on it going, "no, no, no!" I'm going to have to go back to listening to Lillian Jackson Braun – Jim Qwilleran does NOT annoy me as a main character.

I am going to have to vacuum again. It's not even been three weeks – what's up with that? And frankly I should have vacuumed LAST weekend. I've heard tell that some people vacuum on a weekly or even daily basis, but I don't think I believe it.

I finally pulled out my summer clothes & put the turtlenecks away. I only did it because I was smothering every time I saw them – can't even IMAGINE wearing a turtleneck right now. Otherwise I would have just made do with my jeans & the five t-shirts I leave out for winter. Turns out I have actual shorts and capris to wear for summer.

I helped Dr. M mow the lawn this evening**. I actually started the mower on my own! The last time I tried I had no success – but it turns out that it was out of gas. I was going to check that very thing, but Dr. M has a grip of steel & I couldn't get the gas cap off. Anyway, now that I know I can start it myself I might surprise him by mowing sometimes. Might. Anyway, boy was my face red. Really – I wasn't embarrassed, just beet red from the exertion. I could blame my out-of-shapeness, but I've been this way my whole life – my body doesn't have a very efficient cooling system. I took a picture but I'm just not that shameless tonight – it's pretty rough. Instead, I'll leave you with this lovely lane we drove down last weekend. 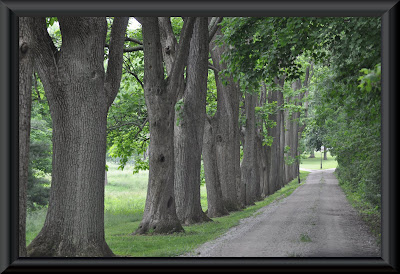 *Every paragraph but the first one starts with "I" - & the first one is just trying to be cute or it would start with "I" too. Well, it is my blog. I won't apologize!