My memory never was as good as it used to be

As I mentioned in this post, my dad is playing Dastardly Dan in a play. Gah! The troupe was written up in the local paper & daddy was quoted. Always a terrifying moment for me. You just never quite know what will come out of his mouth.

The troupe is called the Encore players, made up out of "55ish" and older actors. The name of the play is "The Perils of Precious Penelope or Keep Your Temper(ance) in Check." Everyone involved is apparently having a blast - & the reporter enjoyed watching the rehearsal. The actors in these productions read from their scripts instead of memorizing their lines – which actually makes the melodrama even funnier. My dad says that's ok with him because, his memory never was as good as it used to be. Heh.

In the article, daddy said about retirement and getting older, "Let's let them know that retirement isn't just fishing and playing with the grandkids," he says. "It's about getting out and having a life of your own." Which I find really funny because I don't know when he last fished (Was it that trip down to Santee Cooper when Joe thought Uncle Bill was a bear? Was that even at Santee Cooper?). He should have said that retirement isn't just about golf & gardening – those are his passions.

I think it's great that he's playing an evil villain. He always could make the most terrifying faces – which for some reason always cracked me up. Unfortunately I couldn't find a picture of him with an evil look, so I'm using one of him participating in one of his other favorite pastimes. 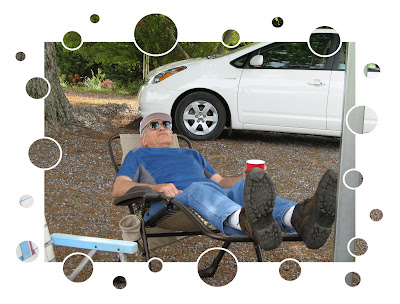 Email ThisBlogThis!Share to TwitterShare to FacebookShare to Pinterest
Labels: Crazy Stuff My Dad Does