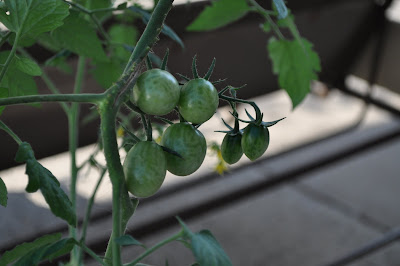 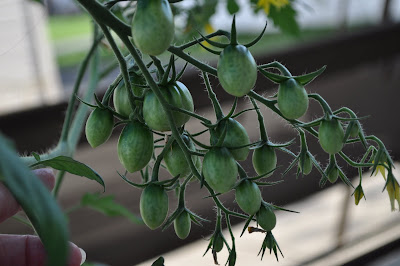 I took some pictures of our Topsy Turvy tomato plant last night. It looks like there is going to be an abundance of cherry tomatoes, but I want to know when they’re going to turn red! I’m impatient!

The Tax Time Pig has had a stuffed Saint Bernard sitting on its back all week. Rather than take a picture I thought I’d just let you envision that. There wasn’t a sign so I’m not sure what exactly this portends.

I appreciated all the positive responses to my poem about the Ohio Cornfield Prostitute. I have really pondered the meaning of the sign and I’ve decided that the most likely scenario is some sort of feud between two people of the female persuasion & one of them posted this not-so-subtle hint about the character of the other one. Anyone else have any other ideas?

Although I’m not a prostitute, I did have some ice cream on Sunday. I had Cow Patty flavor. Dr. M had boring old chocolate (he will tell you that it was excellent - & on sale!).

You may notice that I tend to link to old posts a lot. This is not primarily to get you to go read old posts (although it’s a nice side benefit). I’m just too lazy to say everything again.

On my way to work this morning I was composing a soliloquy about how much I enjoy my commute on pretty days, but then I hit the interstate portion of the journey & started cussing. Took the charm right out of the journey. It’s because I’m listening to music instead of audio books. Music does not soothe this savage beast!

Tomorrow Dr. M & I are heading up to Lake Erie. We’re staying in the town of Marblehead. Marblehead has charm, fishermen, & mayflies (I’m actually hoping the mayflies are gone by the time we get up there). We mostly like to just sit & watch the water & take pictures of the ducks. I’m sure you’ll hear all about it later!

I may or may not post while we’re gone – if not, I’ll see you guys on Tuesday!