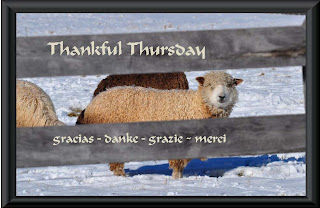 It’s that time again – let’s be thankful!
That’s it for today – what are YOU thankful for?

P.S. I would be open to hosting the Thankful Thursday meme if other folks want to participate. Just let me know!

Email ThisBlogThis!Share to TwitterShare to FacebookShare to Pinterest
Labels: Thanksgiving