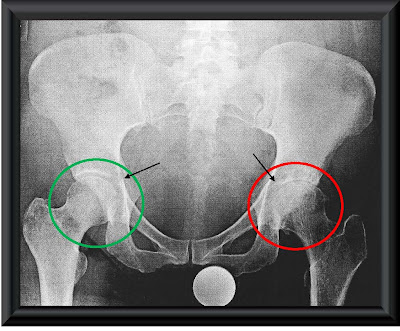 Yep, that’s my wonky hip up there on the right (but it’s my left hip). I don’t know if you can tell the difference between the two (click the picture to enlarge it), but as soon as I saw it I knew that I was in trouble. The arrow pointing to the good hip (circled in green) shows the joint space that should be there. The arrow pointing to the red circled hip shows that there’s practically no space left. Also, just to the right of the arrow (kind of hard to see) are subchondral cysts. Whatever the heck those are. All I know is that it hurts!

I had a follow-up appointment with my surgeon today. The good news is that I don’t have osteoporosis (yay!). We discussed the two surgical options available to me: hip resurfacing or total hip replacement. You may click the link to read about hip resurfacing, but the picture above shows the difference between the too. Basically it’s a way to preserve bone & uses less hardware. It is used on younger more active people because you are able to be more active after that type of hip surgery rather than with total replacement. I’m not particularly active; however, the idea of losing less bone sounds like a good idea. And who knows – after this surgery I might become more active. I sure hope so!

Although I got a number of recommendations, I will probably use the surgeon I saw today. However, I can’t have surgery until August, so I have time to change my mind. He’s just so convenient to my office. I know – that should be the least of my considerations, but there you go.

Between now & August I plan to work very hard to lose some weight. I can hardly speak to myself I’m so annoyed that I gained all this weight after my arthritis diagnosis. Do I not even like myself? What the heck? If I had followed the Arthritis Creed (Exercise & Lose Weight) I could probably have delayed this surgery for years. Let the Bug’s Battle of the Bulge begin!
at April 21, 2011

Email ThisBlogThis!Share to TwitterShare to FacebookShare to Pinterest
Labels: surgery